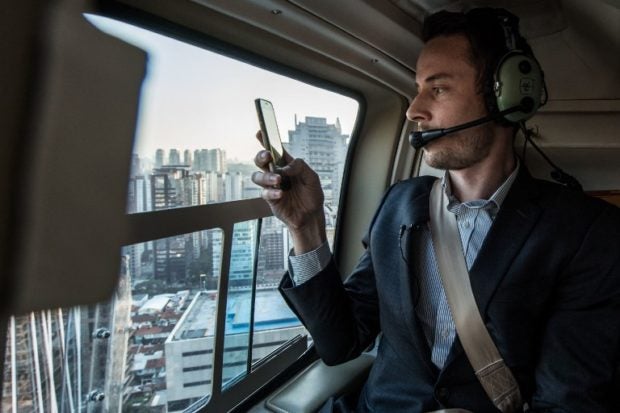 Brazilian businessman Gustavo Boyde flies over Sao Paulo, Brazil on June 23, 2017.
Airbus’ subsidiary Voom gives an alternative for those willing to avoid Sao Paulo’s heavy car traffic, offering a helicopter service similar to the car service offered by Uber. Sao Paulo counts one car every two inhabitants and during rush time there are between 330 and 576 km of traffic jams. AFP

While Uber has changed ground transport in many cities, Sao Paulo’s infernal traffic jams have sparked a new app that opens the sky to commuters: Voom, a helicopter taxi service that charges according to distance plus landing fees.

It’s a godsend for those in a rush — but only if the weather permits.

Gustavo Boyde, a Brazilian living in the United States who goes to Sao Paulo for business, is one of those who says the hops above the city are the only way to get around.

“I’ve opted for helicopters,” he said, pointing to the metropolis sprawling beyond the horizon as he choppered from a chic central district to the airport.

There are 5.9 million vehicles, or one for every two people. At peak hour, traffic can be backed up as much as 576 kilometers (358 miles).

A new venture launched in April by Europe’s Airbus, Voom has taken a page out of Uber’s marketing manual to put clients above it all — at a competitive price.

The app asks passengers to enter their weight and that of any baggage, then immediately sends the calculated fare.

Boyde’s run, from the southeastern neighborhood of Itaim Bibi to the airport some 30 kilometers (20 miles) away, takes nine minutes and costs $150.

Compare that with the market rates before Voom became available. Individual helicopter companies wanted 10 times more — and trips needed to be booked at least two days in advance.

“Our goal is to make helicopter transport accessible to more people, so that the helicopter is seen as an alternative,” said Voom’s executive director, Uma Subramanian.

In Boyde’s case, taking a helicopter through the app was a no-brainer. Using a traditional taxi on the clogged roads would have cost him $50 and an hour and a half of frustrating stop-and-go.

“I chose Voom because it fits within my travel budget, it’s economical and it’s practical,” Boyde said.

“Those are two hours I can now use for work, which is handy given the tight schedule I have,” he said.

According to Subramanian, saturated roads in Latin America mean that “people lose up to 10 hours a week” stuck in traffic.

Sao Paulo topped a list of 500 cities Voom considered for its debut, for a variety of reasons.

The city, which sits in a state of the same name whose population exceeds 45 million, has the biggest fleet of helicopters in the world.

ANAC, the National Association for Civil Aviation, says 700 choppers, or nearly a third of Brazil’s total number, are located there, alongside 528 helipads.

“In the current situation of a contracting market, the arrival of this service is a positive,” said Arthur Fioratti, head of the ABRAPHE association of Brazilian helicopter pilots that covers some 2,000 professional flyers.

Back during Brazil’s boom time, between 2010 and 2013, the sector flourished. ABRAPHE said there were 2,000 helicopter flights a day in Sao Paulo state.

Business travelers are the company’s target clientele — an elite used to taking a lift to the top of a glass-and-steel tower to be picked up on the rooftop helipad.

But it hopes to eventually broaden the appeal of flitting across the sky by bringing fares down to below what a taxi would charge.

Eye on the weather

Currently, between six and 10 people use Voom’s service daily.

“When my friends saw me using a helicopter to get to the airport they asked if I’d become a millionaire. When I told them how much it cost, they were surprised,” said Lucas Amadeu, the head of marketing for a technology company.

“I think that once people know what it costs, the service will grow a lot,” he added.

But while market forces are one thing, Mother Nature is another, and the sometimes violent storms and tropical rain that lash Sao Paulo can ground Voom’s fleet.

At those times, users are forced to resort to ordinary taxis — and to confront road traffic made even more choked by the weather.

Within Brazil, the poor quality of public transport in Sao Paulo is well known. In 2013, the biggest protests the country has ever known erupted when authorities tried to raise fares for the creaking, overburdened network of buses and metros.

One risk for Voom is that it might become too popular. An abrupt rise in the number of helicopters flying above the city could prompt the same sort of response as in New York, where officials are considering ways to limit flights.

For now, though, the company has its view fixed on other horizons.

Its next city pegged for expansion is Mexico City, another badly choked megapolis.

For Boyde, who goes to Mexico City almost as often as he does to Sao Paulo, that is good news.

“If they do the same thing over there, I’ll be their customer,” he said.