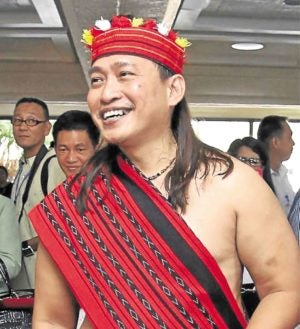 CLARK FREEPORT — Bases Conversion and Development Authority (BCDA) president Vivencio Dizon on Monday ordered the removal of blockades that impede access to and from Sacobia River in a bid to settle a conflict between two Aeta groups over fees being collected from Mt. Pinatubo’s sand.

Dizon, concurrent officer in charge of the Clark Development Corp. (CDC), issued the order following a request made by Pampanga Gov. Lilia Pineda.

Pineda said she was concerned that the inability to deliver sand would delay the construction of projects in preparation for the Asean Summit to be hosted by the Philippines this November.

The problem was among the matters being resolved by CDC president Noel Manankil before he went on leave to give way to a BCDA investigation into alleged corruption in the CDC deals and projects.

The first blockade in Barangay Marcos was put up in May by Mabalacat Aeta Tribal Association (Mata) led by Don Roberts Serrano. Manankil had issued Serrano a notice of violation last year after Mata put up a vibro (sand-sifting) machine without authorization from the CDC.

Mata recently removed the blockade after a dialog with 21 quarry operators on condition that the group would get a share from the P210 fee that the CDC collects for every truckload of sand that is hauled.

Bamban Aeta Tribal Association (Bata), however, has asserted control over the same area.

The group blocked the back gate of Gainersand (formerly known as Dimla Aggregates), to force quarry operators to deal with it instead of Mata. Gainersand operates its own vibro machine and has a land lease contract with the CDC dating back to 2009.

Oscar Rivera, Bata president, signed a 75-year joint management agreement (JMA) with CDC which programmed the development of more than 10,000 hectares covered by a certificate of ancestral domain title. Most of the domain lands are on the side of Bamban town in Tarlac.

Mata has asked the National Commission on Indigenous Peoples (NCIP) to revoke the JMA.

Seeking to protect the dikes in Mabalacat City in Pampanga and downstream of Bamban, Mabalacat Mayor Crisostomo Garbo stopped Gainersand’s trucks from passing through the spillways, prompting the private firm to close its front gate.

Manankil said the P14 million that the CDC collected from sand hauling fees during his stint as president remained intact. The money would be used for socioeconomic projects to be identified by the communities, he said.

Manankil said the jurisdiction row between Mata and Bata continued to drag. The NCIP has yet to recognize which group has valid rights over the areas.

Clark Investors and Locators Association has disputed reports implicating Manankil to corruption due to a Korean-backed group that has business interest in the Sacobia area, a government property in the boundary of Pampanga and Tarlac and near the New Clark City (formerly Clark Green City) project. —TONETTE OREJAS