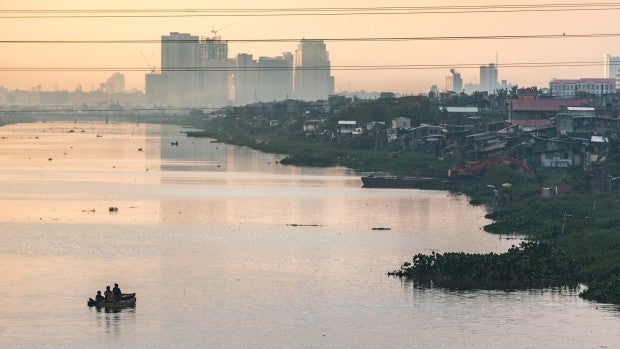 Children paddle around Pasig River during sunset as tall buildings and the slums of Makati are refected on the water. (INQUIRER PHOTO / JILSON SECKLER TIU)

MANILA — While the Duterte administration has implemented some anti-poverty measures in its first year,  it has yet to prove wrong mounting criticisms of some policies deemed to be anti-poor.

In an interview with the Philippine Daily Inquirer on Sunday, National Anti-Poverty Commission (NAPC) lead convenor Liza Maza said while the government has seen to the “concretization” of some policies, particularly in agriculture, “we’re not even halfway there” on addressing high-profile issues such as the poor reportedly bearing the brunt of the administration’s brutal “war on drugs.”

Maza counts as “concretization” of anti-poverty measures so far the appointment of fellow leftist Rafael Mariano as Secretary of the Department of Agrarian Reform; the implementation of free or government-subsidized irrigation; the distribution of seeds for farming; the increase of funds for the Department of Health and the Department of Social Welfare and Development; the resumption of peace talks with the communist-led National Democratic Front of the Philippines (NDFP); free housing for supertyphoon “Yolanda” survivors and for the bottom 10 percent of the homeless; and the lowering of mortgage for low-cost government housing.

“But we still have a lot of work to do…the President’s target was to reduce poverty by nine percent [annually]. It’s a difficult task,” Maza said. Earlier, the NAPC said Duterte had targeted a 25 percent reduction in poverty in three years.

Asked if there had been actions on the mostly poor victims killed in the drug war, or Duterte’s unfulfilled campaign promises such as putting an end to contractualization, Maza admitted: “There are a lot of things that still needs to be pursued. We’re not even halfway there. We’re just actually starting.”

“More than 20 million [Filipinos] are still in poverty as of 2015. They say poverty [incidence] decreased last year, but that still needs to be verified. My theory is that it only happened because 2016 was an election year. A lot of funds were released,” Maza said.

Maza suggested a focus on agrarian reform and national industrialization, which she called “basic pillars of the economy” to address employment problems long-term.

“These are the 10 needs need to be addressed. This is the ultimate measuring stick if policies really are pro-poverty, if they deliver or can deliver solutions to poverty. Otherwise, it’s just all talk,” if poverty is measured based on economic statistics such as the GDP or GNP, Maza said. Doleout systems, meanwhile, are just “bandaid solutions,” she added.

“[The Kilos Sambayanan] seeks greater engagement with communities. We hope to be able to discover and implement prototype [projects] for each standard suited for each community,” Maza said.

Funds for this “prototyping” have been given a boost by the Philippine Amusement and Gaming Corporation, which donated around P50 million to NAPC in March, Maza said.

The NAPC also launched the “Talambayan” over the past year, a “data warehouse” for impoverished communities and poverty indicators so policies are more “evidence-based,” Maza said.  SFM