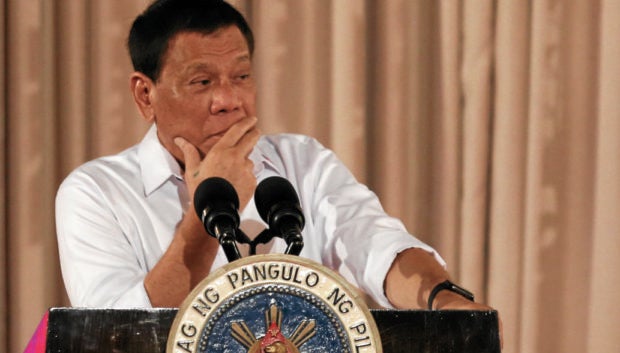 ‘PEOPLE GET THE PRESIDENT’ Malacañang says the people get the President who, in turn gets
the people—and that’s why his approval and trust ratings are high. —JOAN BONDOC

MANILA — In the run-up to President Duterte’s State of the Nation Address, left-wing party-list groups have criticized his administration for failing to fulfill its campaign promises to uplift the lives of people.

Mr. Duterte had in the past proclaimed himself to be “socialist” and won an uneasy alliance with the Left.

But for Anakpawis Party-list Rep. Ariel Casilao, the President’s policies and governance have turned out to be “neoliberal and far from being national-democractic,” and militarization has been hounding oppressed farmers and indigenous peoples in the countryside.

“It is still subservient to foreign monopoly and unresponsive of people’s demand for reforms, even cossetting the fascists’ section of the government,” Casilao said in a statement.

Gabriela Women’s Party, in its State of the Women Address, said women under the time of President Duterte have been hit by a “double-whammy of pro-biz policies and militarism.”

In a statement, Rep. Emerenciana de Jesus said “neoliberal policies, such as contractualization, remain in full swing and women remain victims of rights violations [by the police and the military].”

De Jesus said Duterte should immediately act on his promise to end the so-called “endo (end of contract)” scheme, where companies routinely terminate their workers before they hit their sixth month of service and become entitled to employee benefits under regularization.

The feminist lawmaker said contractualization has remained rampant in the wholesale and retail sectors, as well as electronics manufacturing and food service industries.

De Jesus claimed that 16.22 million women or half the 32.5 million total population of working women have remained shut out of the labor force.

For the party, this highlights a “backward economy that cannot absorb women in productive sectors.”

“The lack of sufficient productive employment for women is made worse by surging prices of basic commodities, lack of decent housing, and the privatization of social services,” she said.

Besides the long-awaited end to contractualization, Casilao cited Mr. Duterte’s other unfulfilled promises, including genuine agrarian reform and rural development, stopping the reliance on rice importation, ending the housing problem of the urban poor, and ending destructive mining.

“The president promised better lives for the poor and this earned him a broad support from the poor, but it totally relies on the actual fulfillment, that the poor could concretely benefit from,” Casilao said.

He said Labor Secretary Silvestre Bello’s Department Order No. 174 only “tolerated” the existing labor practice and even “promoted the monopoly of big business over the labor market.”

Casilao also said the government’s response to countryside concerns has ranged from “indecisive to detrimental to farmers, especially that they are now being subjected to massive militarization and aerial bombings.”

Although Mr. Duterte has allowed urban poor group Kadamay to take over unused and deteriorating socialized housing intended for military and police personnel, Casilao said the occupants have been “deprived of their right to access” services.

“It is appalling that women have become the face of Duterte’s sick jokes in military camps and of the victims of massive displacement due to increased militarization of communities,” Brosas said.

“Certainly, this does compute with Duterte’s supposed pro-women record, a claim he made during the election season,” she added.  SFM