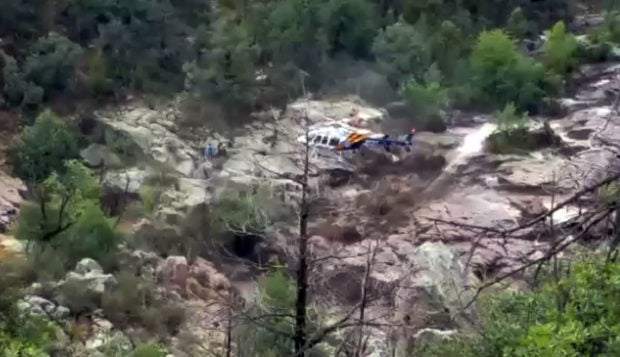 This Saturday, July 15, 2017, image taken from a video provided by Mindy Russell shows a rescue helicopter picking up people who survived a flash flood at a popular swimming hole that swept several people to their deaths in the Tonto National Forest near Payson, Arizona. The flooded area is at lower right. The flood was the result of a thunderstorm that dumped heavy rainfall just upstream, unleashing 6-foot-high floodwaters, dark with ash from a summer wildfire. (Mindy Russell via AP)

TONTO NATIONAL FOREST, Arizona—The flash flood that killed nine people in an Arizona river canyon began its deadly descent as an impressive but avoidable surge of churning water, black with cinders from a recent wildfire and choked with tumbling tree trunks and limbs.

By the time it reached a rocky swimming hole several miles downstream, it was a roaring torrent 6 feet (1.8 meters) high, and an extended family celebrating a birthday while seeking refuge from the summer heat had no warning—and no chance to escape.

The bodies were found up to 2 miles (3 kilometers) away. Five other people were rescued, some of them clinging desperately to trees, and were treated for hypothermia and released.

As rescuers searched Monday for a 27-year-old man still missing about 100 miles (160 kilometers) northeast of Phoenix, authorities identified the victims, who ranged in age from 2 to 60.

Among them were three generations of a family. Five of the dead were children.

The victims had been lounging Saturday in the swimming hole, where rocks create pools and a series of small waterfalls. There the river narrows, squeezing the flow of water and increasing its deadly force.

The river roared to life after a thunderstorm had dumped up to 1.5 inches (3.8 centimeters) of rain in an hour, prompting a flash-flood warning from the National Weather Service.

Though the service sent out a flash-flood warning over cellphone networks, service in the remote area is patchy at best. Unless they had a weather radio, the swimmers would have been unaware.

“They had no warning. They heard a roar, and it was on top of them,” said Fire Chief Ron Sattelmaier of the Water Wheel Fire and Medical District.

Carrie Templin, a spokesman for the Tonto National Forest, said people headed to the forest should check weather alerts ahead of time to determine whether it’s safe. It is hard to predict where rain will fall in the desert Southwest, and people should know that heavy downpours can cause flash flooding, Templin said.

One hiker who was stranded by the flood said she can’t get the sound of the rushing water out of her head.

Nancy Coto, 17, said she was stuck for four hours on a slab of rock with her boyfriend and his family before they were able to walk out.

“We’re all just saying that we got blessed, but I don’t like to use that word because other families weren’t blessed,” Coto said. “Children died.”

About 40 volunteer workers and four search dogs looked for the missing man, whom authorities identified as Hector Garnica.

The search was suspended late Monday afternoon by an approaching thunderstorm, but was scheduled to resume at dawn Tuesday weather-permitting.

Detective David Hornung of the Gila County Sheriff’s Office said more dogs and crews from around the state would be joining the search.

There still is hope Garnica would be found alive, he said. “I’ve seen miracles happen before,” Hornung said.

Garnica had come to celebrate his wife’s birthday with their three children and other family. All were among those killed.

Garnica’s parents were eating at the restaurant in a Phoenix suburb Saturday night when they got a call that something had happened, Price said.

About 5 miles up the mountain from where the family was relaxing Saturday, Scott Muller spotted the water rumbling down the nearly dry East Verde River.

Muller was spending the day with a dozen other members of AZ Krawlers, a volunteer group of Jeep owners that was checking dirt roads and trails for dangerous erosion and missing signs.

It was an area where a June wildfire burned 11 square miles of the Tonto National Forest. Flooding is worse after a wildfire because the scorched land repels water and the lack of vegetation makes soil unstable.

Muller began making a video with his phone from the river bed, and comfortably scampered to the bank before water clogged with debris whooshed past. The river was wide enough that the water was not the inescapable wall it became downstream.

“We had no idea how fast and big it was going to be,” Muller said.

Muller and the others rushed down the mountain on a fire control road to get another look at a phenomenon notorious in the West which they had not seen. Flash floods killed seven hikers in Utah in 2015; 11 hikers died in Arizona in 1997 after a wall of water swept through a narrow, twisting series of walls on Navajo land.

Emerging onto a paved road, the group drove up to a bridge that was about a mile below where the waters would sweep through the swimming hole.

There, Muller said, they warned a couple with two young children playing in the placid river to get out because the river would soon become a monster.

Several minutes later, he said, it did.

Neither Muller nor the group’s leader, Ken Maki, said they knew of the swimming hole.

They didn’t learn of the deaths until that night. JPV