Fire breaks out in 5-story commercial building in Pasig 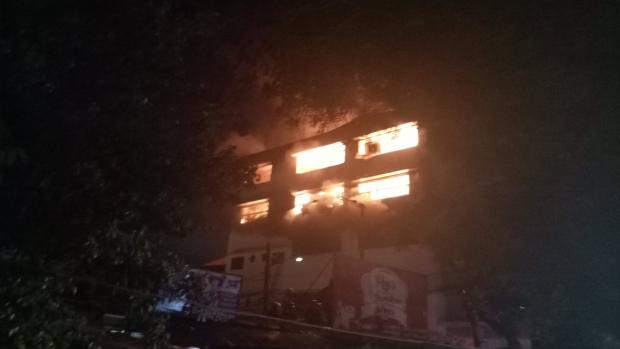 Fire hits the Marius Arcadia at the corner of Pag-asa Street and C. Raymundo Avenue in Barangay Caniogan in Pasig on Monday, July 16, 2017. (Photo from the Twitter account of Fire Alert Metro Manila)

A fire of still unknown cause broke out Monday evening at the Marius Arcadia, a five-story commercial building at the corner of Pag-asa Street and C. Raymundo Avenue in Barangay Caniogan, Pasig.

The building is separated by another establishment from a Shell gas station along Raymundo Avenue.

According to Facebook updates by the Pasig Public Information Office, the Bureau of Fire Protection raised a first alarm on the fire shortly after 6:00 p.m. and raised it to Task Force Alpha shortly after 10:00 p.m.

As of this midnight on Tuesday, firefighters were still trying to put out the blaze, which kept burning reportedly because so much plastic materials stored in the building, according to a report by DZMM TeleRadyo.

Meanwhile, DZBB reported that some residents near the burning building had evacuated their homes.

Fire Alert Metro Manila, a volunteer group, posted some pictures of the fire on its Twitter account.

There were no reports of injuries. But the fire caused traffic around the area to get heavy. /atm