‘There shall be a Bangsamoro country’ | Inquirer News
Close
menu
search

‘There shall be a Bangsamoro country’

“There shall be a Bangsamoro country.”

“I commit my support (for BBL),” Mr. Duterte said in a speech that came after MILF’s two highest ranking leaders—Al Haj Murad and Ghazali Jaafar— presented BBL as the “best antidote” to extremism in Mindanao. 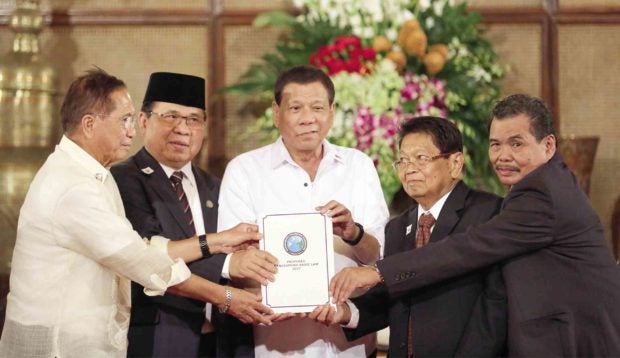 In a speech before Marawi evacuees in Iligan City three weeks ago, Mr. Duterte promised to ask Congress to pass the BBL to establish a new autonomous region in place of the Autonomous Region in Muslim Mindanao (ARMM) which, Mr. Duterte said, could serve as template for federalization.

The current draft was the second produced by the BTC. The first one was produced under President Aquino and was handed over to the Congress in September 2014. The measure made it out of Senate and House committees but didn’t make it to the plenary sessions of either chamber of Congress.

The group had given assurances that the current BBL draft “is more inclusive both in process and content because at least one-half of the MNLF (Moro National Liberation Front) is already on board.”

At least 70 leaders from different sectors in Mindanao, gathered by the Bishops-Ulama Conference in Cagayan de Oro City last week, pushed for BBL as a “strong foundation” for defeating extremism.