Duterte to FVR: You’re my No.1 supporter and critic | Inquirer News

Duterte to FVR: You’re my No.1 supporter and critic 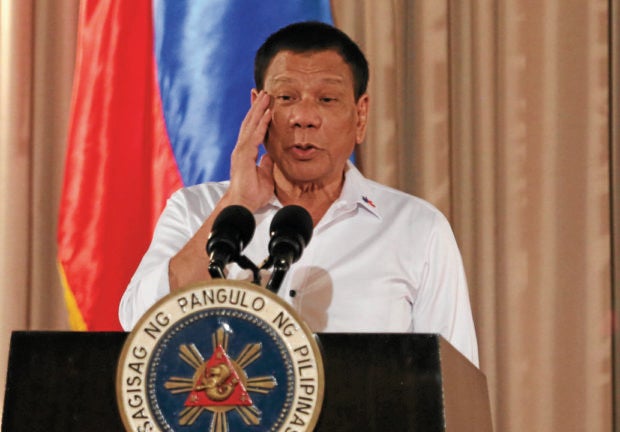 Former president Fidel Ramos may have criticized President Rodrigo Duterte a few times but he still remained a role model to the latter.

Before reading his prepared speech at the book launch of Ramos at Camp Aguinaldo on Monday afternoon, Duterte recognized him as his number one idol and critic.

“I respect your criticism. I accept your advice and maybe I will mimic your role as president before — I will follow you, just like what the shirt says,” he said.

“Only difference is that, I am not a military man. But love of country, patas tayo, sir. I  would say that I love my country as much as you do, and we are ready to die for this country,” he added.

Ramos gifted Duterte with a shirt with words “Follow Me,” the motto of Fort Benning in Georgia, where he took special military courses in the past.

The former president, who was among those who convinced the former Davao City mayor to run in the 2016 elections, continued to express his support for Duterte. Frances Mangosing, INQUIRER.net

Read Next
Ombudsman on Duterte’s tirades: Much ado about nothing
EDITORS' PICK
EDITORIAL: To a bike-friendly future
The Best Tech Gifts For The 2022 Holidays
Is it safe to talk politics again at family gatherings? ‘The Reconciliation Dinner’ shows us what that’s like
House energy committee chair Arroyo bats for cheap electricity
vivo’s coming to town to grant wishes with more holiday promos
Pagasa: Warm, sunny Sunday in most parts of PH
MOST READ
LOOK: Vhong Navarro transferred to BJMP detention facility in Taguig
The Elephant Man in the Senate
Posh village as ‘shabu’ haven
LOOK: Zanjoe Marudo bonds with Ria Atayde, her family
Don't miss out on the latest news and information.