Canada fires drive thousands more out of their homes 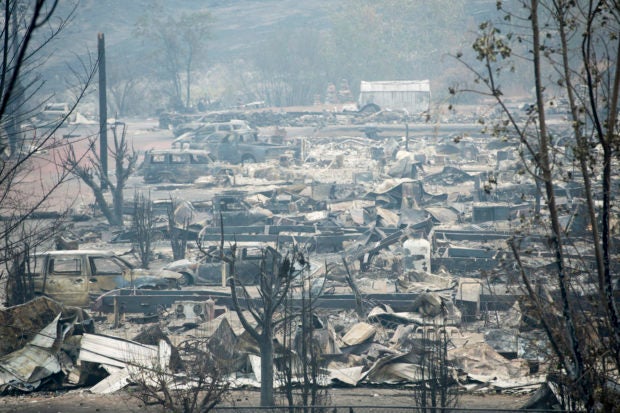 The area of Boston Flats, British Columbia, is pictured Tuesday, July 11, 2017, after a wildfire ripped through the area earlier in the week. British Columbia officials are bracing for a lengthy wildfire season as hundreds of blazes burn across the province with no reprieve in sight. AP

MONTREAL, Canada — Thousands of people fled their homes in western Canada over the weekend as strong winds fanned forest fires that have ravaged British Columbia province for more than a week.

The inferno’s progress prompted authorities to take new emergency measures, ordering the evacuation of 24,000 people in the region including the town of Williams Lake which is home to some 11,000 people, reported public broadcaster CBC.

Some 60 percent of affected residents have already left their homes.

Authorities estimate that around 17,000 people had already evacuated before the latest orders as wild fires sparked by hot dry weather prompted a state of emergency to be declared on July 7.

Navi Saini, a spokeswoman for the province, said there were currently 161 wildfires active as of Sunday.

Further to the south, fire crews equipped with planes and helicopters in the US state of California were making steady progress against 11 active blazes fueled by searing temperatures and high winds.

“Great news! All evacuation warnings for the #AlamoFire have been lifted. There is fire equipment still in the area working – use caution,” the official account for Cal Fire tweeted.

The Whittier fire, which began on July 8 and stretched across 18,015 acres and has burned down almost 2,000 structures was 36 percent contained, according to the agency. CBB