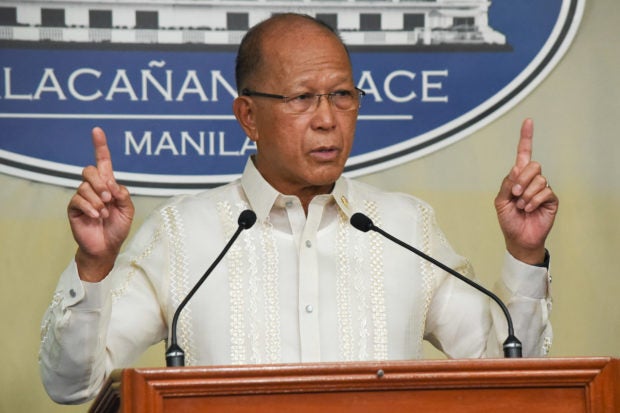 Defense Secretary Delfin Lorenzana has submitted to President Duterte one of the reports that the Chief Executive needs to decide whether to request Congress to extend military rule in Mindanao.

Lorenzana submitted the report on Thursday.

The Philippine National Police is expected to submit soon its own recommendation whether to extend or lift martial law in Mindanao.

In a text message to reporters on Sunday, Lorenzana did not give details of the recommendations that he and Gen. Eduardo Año, chief of staff of the Armed Forces of the Philippines, submitted to Mr. Duterte.

“Let us wait for the President’s decision. It could be the same as mine or [different]. If different, detractors will pit us against each other again. It’s better to wait,” Lorenzana said.

Mr. Duterte placed all of Mindanao under martial law on May 23 after hundreds of gunmen from the Islamic State (IS)-inspired Maute and Abu Sayyaf terrorist groups seized parts of  Marawi City in a bid to establish an enclave for the Middle East-based jihadist group in Southeast Asia.

The proclamation, which has been upheld by the Supreme Court, lasts for 60 days and unless extended by Congress, ends in less than a week.

A vigorous air and ground campaign launched by the military has reduced the 400-700 terrorists who laid siege to Marawi to just about 60, who are now holed up in the city’s commercial center.

The fighting has cost the lives of 553 people, 97 of whom are soldiers and police, Col. Edgard Arevalo, chief of the military’s public affairs office, said on Sunday.

The remnants of the IS-inspired terrorists have been boxed in a square-kilometer pocket of the city’s commercial center and troops are pressing an operation to flush them out, Arevalo said.

There has been talk of the military being asked to finish the job before Mr. Duterte addresses a joint session of Congress on July 24, but security analyst Ashley Acedillo said the military should not allow itself to be tempted with such a deadline.

Slowing the military advance is the presence of civilians in the city, including about a hundred held by the terrorists as hostages.

Most of Marawi’s more than 200,000 residents fled when fighting between government forces and the terrorists erupted on May 23.

But many stayed despite the danger.

Among those who decided to take their chances is the family of Pendatun Guro, 62, a former colonel in the Philippine Army.

“The firefight was intense just over there,” Guro said, pointing to the end of the road that connected his village of Saduc to Saber village, where the terrorists seized Amai Medical Center on May 23.

But nobody in his family thought of leaving, not even if the fighting was almost at their doorstep, Guro said.

“We did not cower. We stayed behind even as people were rushing out of their homes to flee,” he said.

Guro’s wife, Norshida, said the family decided to stay because of uncertainty elsewhere.

“This is more comfortable than elsewhere. We have been living here for years and this is the only place we can call home,” said Norshida, a schoolteacher.

She said the family strove to live as normal a life as possible despite the intense fighting, with bomb and shell explosions from government airstrikes and artillery attacks serving as their alarm clock in the morning.

“The only thing missing is the sound of cars, the honking of horns of vehicles lining up at the car wash,” said Guro’s son, Ador.

“And there are no neighbors, people passing by our house,” he added.

Authorities called on the remaining residents to leave as the fighting got worse, but Guro said he and his family refused to leave.

“Why are we going to leave? This is our home,” he said. —With a report from Allan Nawal