State of calamity in Bohol 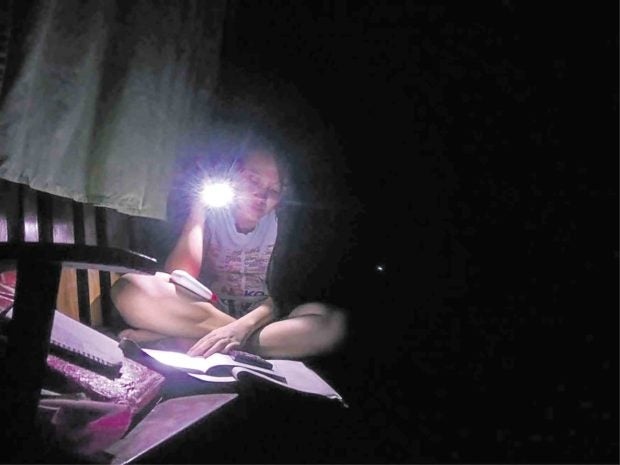 The power shortage now gripping Bohol is prompting residents
to cope, like using flashlights to read books and finish homework like what this student in Tagbilaran City is doing. —LEO UDTOHAN

TAGBILARAN CITY—A state of calamity has been declared in Bohol to help the province cope with the economic impact of a severe power shortage caused by a 6.5-magnitude quake that was barely felt in Bohol but pummeled Leyte, the province hosting geothermal plants that are Bohol’s main sources of electricity.

The July 6 quake left no damage in Bohol but caused heavy damage on geothermal plants in Leyte on which Bohol relies for electricity. The provincial board considered its economic effects too significant to merit a declaration of a state of calamity.

Board Member Tomas Abapo, majority leader of the provincial board, said a 1998 memo of the National Disaster Coordinating Council allowed the declaration of a state of calamity in an area suffering from disruption of power and water supplies and communication systems.

Two of such conditions—disrupted power and water supplies—now exist in Bohol, said Abapo, a lawyer.

Following the declaration, board members asked President Duterte and other national government agencies, in a separate resolution, to include Bohol in a program that subsidized power generation, transmission and distribution costs.

The subsidy would ease the burden on residents of paying higher electricity costs that are expected when the province taps sources of power other than geothermal.

Abapo said officials worried about possible economic losses that the power shortage could bring the province.

In Panglao town, a major tourist destination, resort owners and operators had been

complaining of cancellations of bookings and increased power costs as a result of the use of generators. Water supply had been disrupted, too, because there was not enough power to run pumps that bring water to taps.

Some resort employees had to go on extended leave as only a few tourists were arriving as a result of the power shortage.

He said three proposed docking sites for the barges had been inspected in the towns of Cortes, Maribojoc and Loon.

Once the barges are in place, the National Grid Corp. of the Philippines would install lines to transmit electricity to distributors.

Each barge can generate up to 32 megawatts of power, barely enough to provide Bohol’s demand of 70 to 80 MW.

In Tagbilaran City, BLCI is using the 12-MW Bohol Diesel Power Plant in the village of Dampas but it could not supply the city’s entire demand.

Boheco 1 and 2 have been tapping hydropower plants that could generate only up to 8 MW.