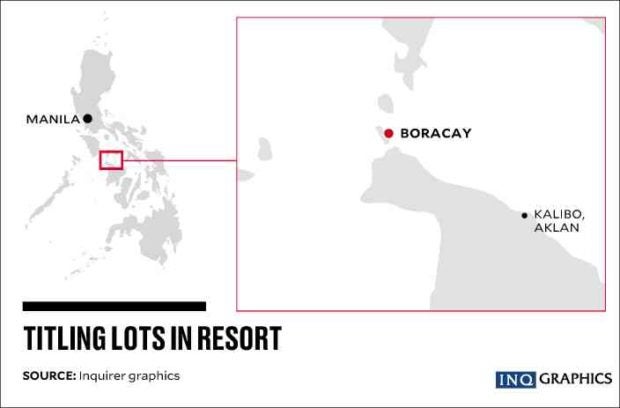 ILOILO CITY — The Western Visayas office of the Department of Environment and Natural Resources (DENR) had recommended the lifting of a moratorium on titling of lots in the world famous resort Boracay Island.

In a five-page memo to Environment Secretary Roy Cimatu, DENR Western Visayas chief Jim Sampulna recommended the lifting of the six-year moratorium on processing of application for and issuance of land titles in the 1,032-hectare island famous for its white sand beaches.

Only about a third of the island (292 ha), originally belonging to the heirs of Ciriaco Tirol, are titled, according to the DENR.

Most land claimants in Boracay pay tax declarations, many for more than 30 years, as proof of ownership or rights over lots.

Titling of lots in Boracay had been prohibited when areas on the island were declared as tourist and protected zones by the late dictator Ferdinand Marcos in 1978.

On May 22, 2006, then President Gloria Macapagal-Arroyo issued Proclamation No. 1064 which categorized nearly 629 ha of the island as alienable and disposable and the rest as forest land and protected areas.

But on March 23, 2011, then Environment Secretary Ramon Paje issued a memo suspending approval of survey plans, processing of public land title application and issuance of patents, according to Sampulna in his memo.

The boom in tourism had attracted property claimants and investors, pushing land prices upward. Lots now go for P15,000 to P50,000 per square meter if they’re near the beach and P5,000 to P15,000 per sq m if they’re inland.

In recent years, violent clashes had erupted between feuding claimants.