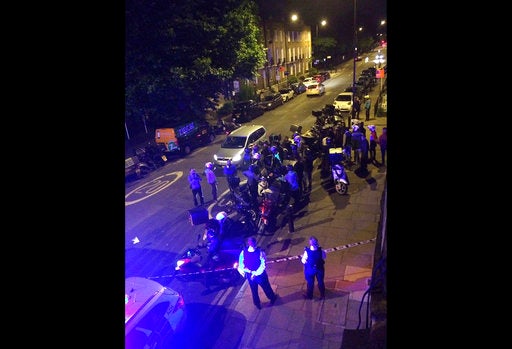 This is an image made available by Sarah Cobbold of the scene of an acid attack in London early Thursday July 13, 2017. Police said that five linked acid attacks by men on mopeds in London have left several people injured.  (Sarah Cobbold via AP)

LONDON — British police have charged a teenager with a spate of London acid attacks, as authorities consider whether tougher sentences would curb a spike in assaults with corrosive liquids.

The Metropolitan Police force says a 16-year-old boy faces 15 charges, including grievous bodily harm. The boy, who can’t be named because of his age, was arrested after five moped riders were attacked during a 90-minute period last week.

The government says it is considering increasing sentences for acid attacks to a maximum of life. Home Secretary Amber Rudd wrote in the Sunday Times newspaper that those who use noxious liquids as a weapon should “feel the full force of the law.”