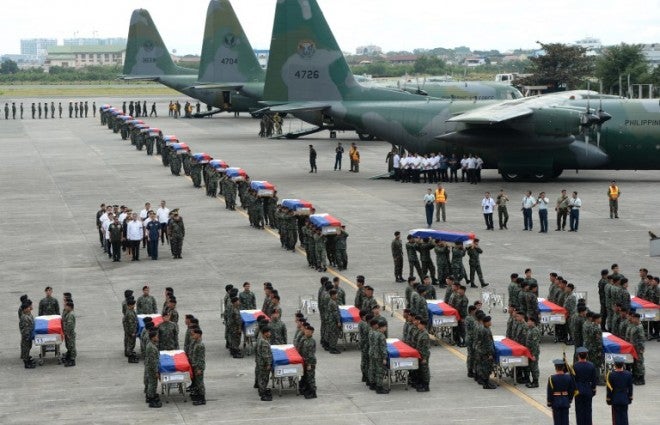 Philippine police commandos carry the flag-draped coffins of their fallen comrades from C-130 planes shortly after arriving at the Villamor Air Base in Pasay City in this file photo taken on January 29, 2015. AFP PHOTO / TED ALJIBE

“That’s his karma,” said one of the elite commandos who took part in the bloody operation against Malaysian bomb expert Zulkifli Bin Hir alias Marwan and his protegé Abdul Basit Usman on January 25, 2015.

The officer, who refused to be identified for security reasons, said he is hoping justice will be swift for his fellow commandos who perished in the 12-hour gun battle against the combined forces of bandits and Moro rebels.

For another police official, the Ombudsman’s decision to indict Aquino was “good news” for the SAF troops and for the families of SAF 44, as what the Mamasapano victims are collectively called.

The police commander, who was privy to the details of the operation plan against Marwan, said Aquino failed to give the “support” the SAF troopers were asking for at the height of the firefight.

“This is good news for our brothers who sacrificed their life, begging for the support na kaya naman sana niya (Aquino) ibigay (that he can easily provide),” the official told Inquirer.

The official requested anonymity for lack of authority to speak on the matter.

He said the development in the Mamasapano case gives the troops “high hope” that someone would finally be held accountable for the massacre of 44 men.

In a resolution released Friday, Ombudsman Conchita Carpio-Morales ordered the filing of criminal charges against Aquino for his liability in the Mamasapano massacre.

In her resolution, Ombudsman Morales ordered the filing of charges against Aquino for Usurpation of Authority (Article 177 of the Revised Penal Code) and violation of Section 3(a) of the Anti-Graft and Corrupt Practices Act (Republic Act No. 3019).

The case of usurpation of authority was filed against Aquino for allowing then suspend Philippine National Police (PNP) chief Alan Purisima to participate in the planning of the operation against Marwan.

Purisima was later dismissed for his involvement in a shady firearms license deal.

Morales, however, cleared Aquino of the homicide charges, because the deaths of the 44 SAF men “remain to be the intentional act of shooting by the hostile forces.”

Aquino may still file a motion for reconsideration on the Ombudsman’s indictment against him for usurpation of authority and graft.  JPV