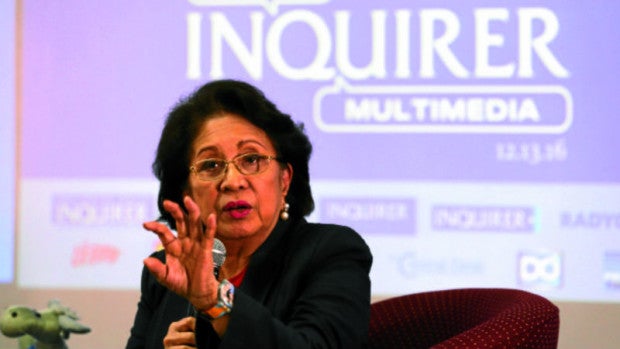 MANILA — Ombudsman Conchita Carpio Morales has spoken out for the first time against President Duterte’s take-no-prisoners approach to crime suspects, saying his directive to kill people is “not acceptable” under any circumstance.

“He’s goading people to kill people. That’s a problem,” she said in an
interview with Japan’s NHK World on Thursday evening.

“The directive to kill people under any situation, irrespective of how, irrespective of the context, to me, that’s not acceptable,” said Morales, a Ramon Magsaysay laureate and former Supreme Court justice.

She said Mr. Duterte’s publicists might try to explain or justify his words but they could not deny the impact of his message.

“His communications people say ‘that’s hyperbole.’ You know, they try to rationalize whatever he says, so, whether or not the police or whoever he addresses these words believe him, that’s a different story,” Morales said.

On Wednesday, while addressing personnel of the Bureau of Jail Management and Penology, Mr. Duterte boasted of being the only President who could openly order the killing of “those sons of
bitches,” referring to drug suspects.

He said law enforcers should kill those who tried to fight back. “If they do not fight back, then make them,” Mr. Duterte said, reverting to his outrageous but increasingly familiar rhetoric against suspected
criminals.

But the comments of the brutally frank Morales on Thursday were the first she ever made against Mr. Duterte, breaking a self-imposed silence since the President launched his bloody crackdown on drugs last year, leaving thousands dead in police operations or vigilante-style killings.

In December, appearing at an INQUIRER forum, Morales said “It’s not illegal to say ‘I will kill you’,” when asked to comment on Mr. Duterte’s threats to kill criminals.

Morales is related by marriage to the President. Her brother Lucas Carpio Jr. is the father-in-law of Mr. Duterte’s daughter Sara Duterte-Carpio.

In the NHK interview, whose narrator called her the “Iron Lady of the Philippines,” she said her office had received some complaints that were related to the drug war, particularly the cases related to detained Sen. Leila De Lima, one of Mr. Duterte’s most outspoken critics.

“So we try to consolidate all these complaints and conduct a fact-finding investigation,” she added.

But Morales, who was plucked from retirement by former President Benigno Aquino III in July 2011, may not have enough time. Her seven-year term will lapse next year.  SFM