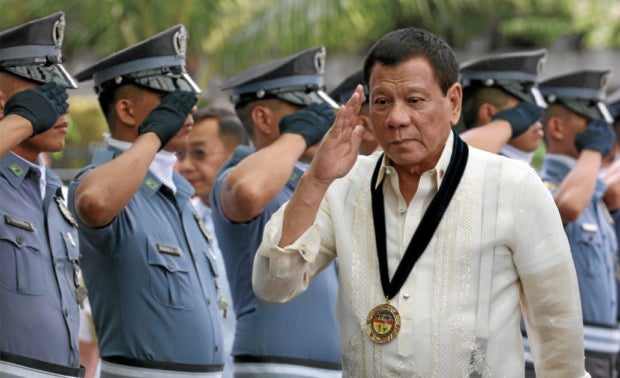 President Rodrigo Roa Duterte during the 26th Anniversary of the Bureau of Jail Management and Penology ( BJMP) held at Camp[ Aguinaldo, on July 12,2017 (INQUIRER PHOTO/JOAN BONDOC)

MANILA — The Office of the President’s expenses for overseas travel doubled and awards for policemen bloated under the first six months of the Duterte administration.

According to the Commission on Audit’s annual audit report for 2016, foreign traveling expenses jumped to P369.64 million, up by 187.1 percent from P128.75 million the year before.

The 2016 figure was also higher than the P202.25-million figure logged in 2014, the earliest year for which a breakdown of the OP’s maintenance and other operating expenses (MOOE) was provided by COA.

“Increase in Traveling Expenses-Foreign was due to foreign travels of the President to Malaysia, Vietnam and China,” read the COA report.

Local traveling expenses, however, decreased to P27.05 million in 2016, from P55.71 million spent the year before when the country hosted the Asia-Pacific Economic Cooperation Summit.

The sharp increase represented the awards given to Philippine National Police personnel “due to meritorious and invaluable services rendered during the second semester of [calendar year] 2016,” although no breakdown was provided in the report.

Mr. Duterte has focused on his controversial and bloody campaign against the illegal drug trade. In December, the issue of rewards made headlines after PNP Director General Ronald dela Rosa announced that the President planned to give away cash rewards for Christmas.

In January, Mr. Duterte suspended his anti-drug campaign to order an “internal cleansing” after admitting that “the culture of corruption in the police is deep.” The following month, he admitted to giving money to policemen “every command conference,” but said these were meant for buy-bust operations.

Overall, the OP recorded a decrease in MOOE to P2.23 billion, 69.1 percent down from the P7.21 billion spent by the agency when the country hosted the APEC summit in 2015. Still, this was higher than
the P1.34 billion incurred in 2014.  SFM