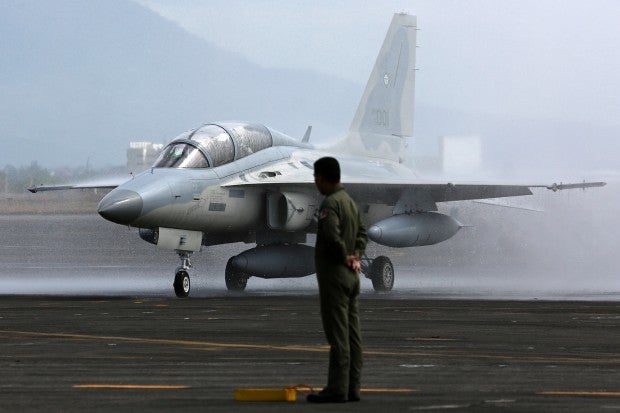 The military has temporarily suspended the use of FA-50 fighter jets following the friendly fire incident in Marawi City on Wednesday noon.

“The Armed Forces is suspending the use of that particular aircraft for any further airstrike until such time that the cause of the accident has been determined, or the failure of the equipment has been determined. Until such time we are sure of the cause of one of those bombs falling short of target will we then resume the use of that aircraft,” AFP spokesperson Brig. Gen. Restituto Padilla said in a press briefing on Thursday.

Two soldiers were killed and 11 were wounded after a bomb that was dropped by one of the FA-50s missed the target. The impact of explosion caused structures to collapse, hitting two of the soldiers with large debris.

But Padilla said that despite the friendly fire, the aircraft has a “high success rate” in its airstrikes against the terrorists holed up in concrete structures.

“Almost 70 missions that were performed by the aircraft except for this incident, all of their missions were dead on target. They hit their targets (with) specific precision,” he said.

Airstrikes using other air assets will continue however, despite the grounding of the FA-50s.

“The incident yesterday however will not cancel out or prevent the use of any other aircraft, other than this one,” he added.

The military has 12 FA-50 fighter jets bought from Korea Aerospace Industries during the Aquino administration. It is the biggest military upgrade thus far, with its cost of P18.9 billion.

In May, 10 soldiers were also killed from friendly fire using the SF-260 light attack aircraft. These SF-260s were also temporarily suspended from operations but eventually were cleared for deployment after an investigation. JPV