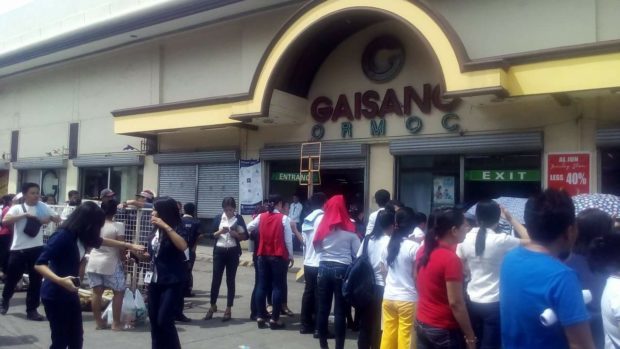 Customers and personnel at the Gaisano Capital in Ormoc City rush out from the building after a 5.6 magnitude tremor shook the city on Monday morning, July 10, 2017. The earthquake at Ormoc happened a few days after a 6.5 magnitude earthquake hit Kananga, Leyte, on July 6, 2017, which was also felt in other Visayas provinces and cities, including Ormoc City.  (PHOTO BY JOEY GABIETA / INQUIRER VISAYAS)

MANILA — Two Eastern Visayas lawmakers have urged President Rodrigo Duterte to place the entire region under state of calamity after the July 6 earthquake plunged the area into darkness and paralyzed the local economy.

In a Wednesday briefing, Eastern Samar Rep. Ben Evardone cited the National Economic and Development Authority’s projection that the regional economy would lose P300-500 million a day as leading industries like copra and fishing have been rendered powerless.

Not only did the 6.5-magnitude earthquake on July 6 damage the region’s primary power source of Tongonan Geothermal Power Plant, a 5.4-magnitude aftershock on July 10 also damaged the transmission lines that could have allowed the importation of power from Cebu.

Without electricity, copra millers could not operate and fishermen had no ice to keep their catches fresh.

“We are calling on Malacañang to declare Region 8 under state of calamity so we can do something about it. We need the rapid deployment of power barges [and] generators,” Evardone said, adding that the costs could be subsidized through such a declaration.

He added that the declaration would make the government prevail in freezing prices and speed up the lowering of power rates which should be processed by the Energy Regulatory Commission.

Evardone said his province was not seriously hit by the 6.5-magnitude earthquake on July 6, which was centered eight kilometers southwest of Jaro, Leyte.

However, Samar 1st Dist. Rep. Edgar Mary Sarmiento pointed to the lack of an alternative converter in their island, which has left it reliant on its quake-hit neighbor and unable to import power from Bicol to the north.

Under Republic Act No. 10121, a state of calamity could be declared by the President or the concerned local council in order to freeze the prices of basic commodities, provide for the grant of no-interest loans, and release calamity funds.  SFM