'Maute terrorists may have weakened in Marawi but that does not mean they will not attack again' -- PNP chief
By: Jeannette I. Andrade - Reporter / @jiandradeINQ
Philippine Daily Inquirer / 08:20 PM July 12, 2017 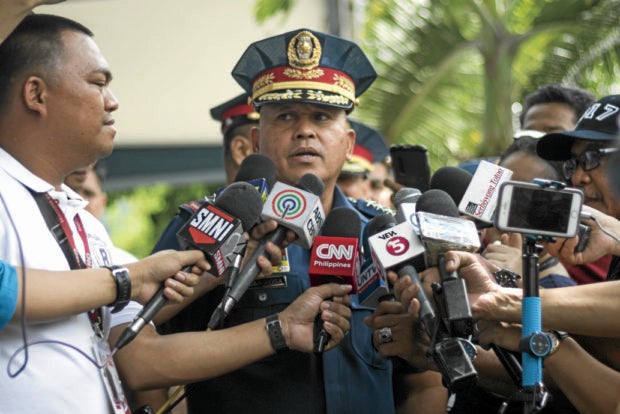 MANILA — The Philippine National Police (PNP) asserted on Wednesday the need to extend martial law in Mindanao, claiming that major cities in the region have remained under threat from a Marawi-like siege.

Speaking to reporters after a law enforcement logistics support agreement signing between the Korean government and the Department of the Interior and Local Government in Camp Crame,  PNP Director General Ronald Dela Rosa said that all major cities in Mindanao have remained under threat from the Maute Group despite previous pronouncements that the terror group has considerably weakened.

Dela Rosa said the PNP has not monitored a specific, imminent threat to any locality, but “we assessed that all the major cities in Mindanao are under threat” based on the Maute Group’s original plan.

According to Dela Rosa, under threat are Zamboanga City in the Zamboanga Peninsula; Iligan City and Cagayan de Oro City in Northern Mindanao; Davao City in the Davao region; General Santos City and Pikit, North Cotabato in SOCCKSARGEN; and the provinces in the Autonomous Region in Muslim Mindanao.

Also under threat are the Surigao Provinces and Butuan in the Caraga Administrative Region, which are along the route of transportation to the Visayas and Luzon.

He explained in Filipino, “We cannot disregard any information. We will take this information seriously. They were able to take siege of Marawi City, they can do it anywhere else.”

While he acknowledged that the Maute Group has not been in its full capacity in the past few weeks, Dela Rosa said, “We better not take chances. We have to make sure…Let’s use martial law to ensure the safety and security of the entire Mindanao.”

The PNP chief said that all security forces and even communities have been taking steps and staying vigilant to prevent any spillover of conflict in their areas from Marawi City.

Even then Dela Rosa said that President Duterte’s assessment of an end to the conflict in Marawi City in two weeks was a “very good assessment.”

“He is very much aware of  the situation. He is being briefed every now and then about the situation in Marawi City so he came up with that assessment,” he pointed out.  SFM