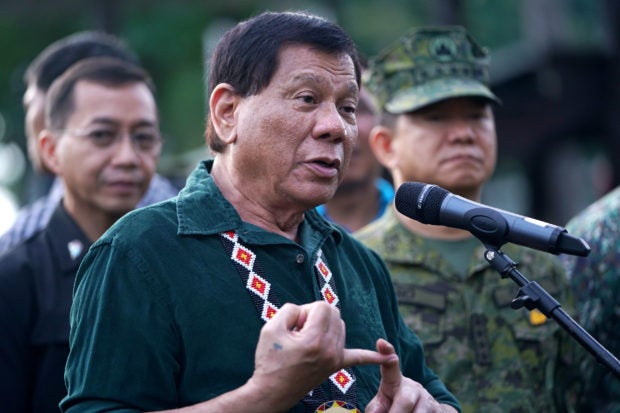 MANILA — President Rodrigo Duterte’s office can now spend unused discretionary funds consisting of P1.41 billion in donations from a scion of the Lopez family and P5 billion in gaming proceeds that have only recently been remitted to its purse.

These discretionary funds were not used by the Aquino administration: the Lopez donations due to lack of guidelines that could have eased the impact of calamities, and the Philippine Amusement and Gaming Corp. (Pagcor) proceeds because it was not collected on time.

The two lump-sum funds were meant for economic development and disaster mitigation, and financial assistance for law enforcers, respectively. The inability of the Office of the President to spend the funds during the Aquino administration now leaves them at the disposal of Mr. Aquino’s successor.

In its annual audit report for the year 2016, released Wednesday, COA said the failure to issue guidelines “may have prevented” OP from using the Lopez donation proceeds “during the times when the country was severely hit and devastated” by severe natural calamities.

COA urged OP to issue the necessary work and financial plan “in order [sic] mitigate poverty and the sufferings of Filipino people affected by natural calamities.” Auditors reported the OP management agreed with the recommendation.

The P1.41-billion proceeds came from the 2008 sale of the 3,333,333 Manila Electric Company shares donated by late Benpres Corp. president Eugenio Lopez Jr. to the OP in 1990. The donation came as part of a compromise agreement to settle a dispute then about the Meralco Foundation, Inc.’s ownership of 27.78 million shares.

The deed of donation provided for the shares to be used for economic development projects in accordance with a national priority plan. The shares were finally sold to the Government Service Insurance System on Dec. 10, 2008, and the proceeds were recognized by the OP on Dec. 30, 2010.

But, for the next six years, the lack of guidelines and policy hindered OP from spending the amount on the likes of agrarian reform, assistance to disaster victims and rehabilitation of depressed areas.

Meanwhile, COA also reported that OP was only able to collect P5 billion from Pagcor on Dec. 29, 2016. The amount represents the share of Pagcor’s net income which should have gone to the President’s Social Fund beginning June 2014.

It used to be managed by the Presidential Management Staff until it was transferred to the OP on Oct. 8, 2014. However, Pagcor did not remit its share for the PSF to OP, prompting COA to issue an audit observation memorandum on June 15, 2016.

Before OP finally made representations with Pagcor, the state corporation’s last remittance was made in July 2014 for the month of May 2014. Although it was belated, COA still “commended” OP under the Duterte administration for finally being able to collect its share of Pagcor earnings.  SFM