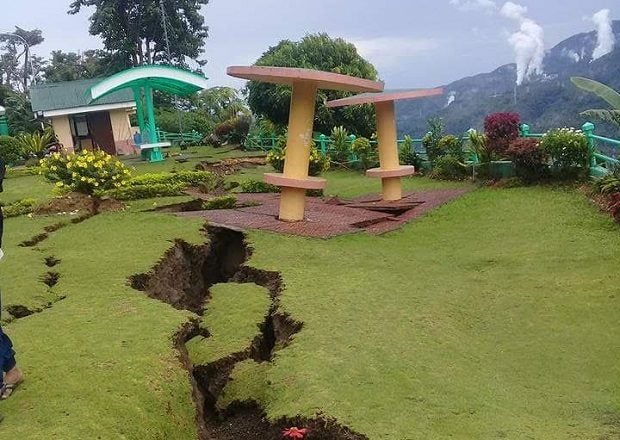 Cracks caused by the magnitude 6.5 earthquake on Thursday, July 6, 2017, are visible in Barangay Tongonan, Ormoc City in Leyte. On the background are steams coming from the geothermal power plants ran by the Energy Development Corp. (Photo courtesy of CATHY IG-AGAO PANGANIBAN)

Two congressmen from Samar on Wednesday called on the national government to declare a state of calamity in the whole Eastern Visayas region, which was rocked by a 6.5 magnitude earthquake.

In a press briefing at the House of Representatives, Eastern Samar Rep. Ben Evardone and Samar Rep. Edgar Sarmiento said there is a need for a declaration of a state of calamity in the whole Region VIII to fast-track the deployment of power barges and generators.

This because the region remains marred with a power outage since the quake struck on July 6, causing millions of economic losses, the congressmen said.

Evardone said the declaration of a state of calamity in the region would allow the national government to suspend increases in prices of goods and services, and to pave way for immediate restoration of power.

He said the power outage in the region has burdened the fisherman the most, because of the lack of ice to keep the catch of fish fresh.

(We are calling for a comprehensive approach. Besides the fact that there is a need for immediate restoration, even partial availability of power by way of deployment of power barges and modular generators will do.)

Evardone said the Eastern Visayas region loses P300 to P500 million daily due to the quake, according to figures from the National Economic Development Authority.

Evardone said the copra industry in the region is severely affected due to the lack of electricity.

The region would need as much as 210 megawatts to restore power, Evardone said.

Meanwhile, Sarmiento said there is a need for disaster-proof transmission lines, which were also damaged by the quake.

He also lamented that the power has been out for a week already.

Under Republic Act 10121 or the “Philippine Disaster Risk Reduction and Management Act of 2010,” a state of calamity is defined as “a condition involving mass casualty and/or major damages to property, disruption of means of livelihoods, roads and normal way of life of people in the affected areas as a result of the occurrence of natural or human-induced hazard.”

The declaration of the state of calamity which may be declared by the President or the local sanggunian would allow for easy implementation of the following:  appropriation for calamity funds; price freeze for basic necessities; and the granting of no-interest loans, according to the Philippine Disaster Risk Reduction and Management law. JE