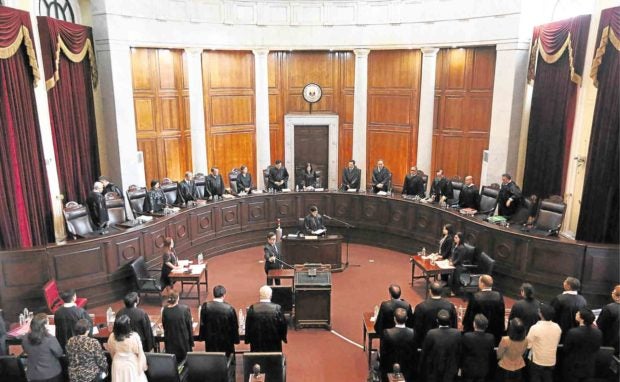 The Supreme Court justices, sitting as the Presidential Electoral Tribunal, allowed the camp of Vice President Leni Robredo to extend the payment of the remaining P7 million for her election counter-protest against former-Sen. Bongbong Marcos. PHILIPPINE DAILY INQUIRER / MARIANNE BERMUDEZ

Robredo’s lawyer Atty. Romulo Macalintal on Wednesday said the PET did not specify the period of extension.

“PET will determine [the period of extension] based on the arguments we will raise in our motion,” Macalintal said.

He said they would tell the PET that the extension should be until such time that the recount on the three pilot provinces in Marcos’ protest would have been terminated.

“If the results show Marcos [was] able to make substantial recovery, then we will pay, [but] if not, no need to pay because protest will be dismissed,” Macalintal explained.

“And since the first issue to be resolved is integrity of the 2016 automated election system then I calculate the retrieval and recount may still be held sometime January 2018,” he added.

Marcos filed the protest ‪‪on June 29, 2016, claiming that the camp of Robredo cheated in the automated polls of May 9 earlier that year. He sought the annulment of about a million votes cast in three provinces – Lanao del Sur, Basilan and Maguindanao.

In his protest, Marcos contested the results in a total of 132,446 precincts in 39,221 clustered precincts covering 27 provinces and cities.

During Tuesday’s preliminary conference, Macalintal told the PET that since the tribunal was still in the exploratory stage on the collection of ballot boxes and that it involved only three provinces, it would only be practical and reasonable to suspend Robredo’s payment of the cash deposit.

The PET told Macalintal to file his motion as it extended the July 14 date for Robredo’s last installment of the P15.44 million required for her counter-protest. Robredo paid the initial installment of P8 million last June.

PET also told the parties to comment on the summary of issues and evidence prepared by the PET within five working days.

Under Section 33 (b) of the PET rules, a protestant is required to make a cash deposit to the tribunal the amount of P500 per contested precinct “if they require the bringing of the contested ballot boxes and election documents to the tribunal.”

Marcos filed an election protest against Robredo in June 2016 due to alleged fraud, anomalies and irregularities that marred the May 9 elections that ensured the victory of Robredo, the vice presidential candidate of the Liberal Party.

Robredo has denied Marcos’ allegations, saying she has no history of cheating. CBB