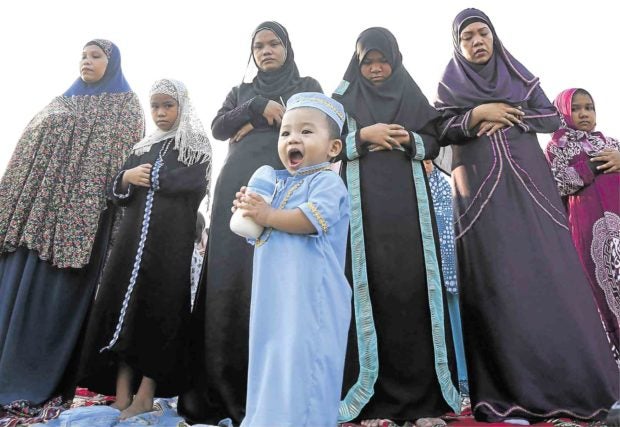 Filipino Muslims gather at Quirino Grandstand in Manila during this year’s Eid al-Fitr, an important religious holiday celebrated by Muslims worldwide that marks the end of Ramadan, the Islamic holy month of fasting. —MARIANNE BERMUDEZ

CITY OF SAN FERNANDO — Two Muslim groups that developed their own identification (ID) system in Tarlac province said they won’t yield to criticisms, insisting it was both a way to shut out lawless elements and a tool for transacting with the government.

“It’s ongoing,” Datumaas said when asked about the status of the ID system in Paniqui town. Jabbar gave the same answer when reached by telephone.

Earlier, Chief Supt. Aaron Aquino, Central Luzon police director, described the Tarlac ID system as the “best practice that can be replicated in [the region].”

In Manila, presidential spokesperson Ernesto Abella said “nobody” in the national government was proposing an ID system for Muslim Filipinos.

“The Palace’s position is really for a national ID. So, I think we should leave it at that,” Abella told reporters yesterday.

“That particular ethnic-centered ID was really a local initiative and… the Palace’s position is that there should be a national ID,” he added.

“Look, nobody’s pushing for that, okay? As the good director of Philippine National Police has already said, this is not a mandate coming from the… higher authorities,” Abella said.

Two senators earlier tagged as discriminatory the proposal to impose an ID system for Muslims.

Senators Sherwin Gatchalian, a member of the Senate majority, and Bam Aquino, of the minority bloc, said the ID system would single out Muslims. Officials of Autonomous Region in Muslim Mindanao said a Muslim-only ID system was discriminatory.

Two officials of the Commission on Elections (Comelec) took to Twitter to criticize plans to distribute ID cards to Muslims, saying the move was religious discrimination.

“An ID for Muslims? Surely not the voters’ ID. I won’t agree to put religion there,” said Comelec Commissioner Rowena Guanzon on her Twitter account.

“An ID for Muslims will have an effect on political rights, discourage them from running for office in local government units and discourage [them] from voting,” she said.

Commissioner Luie Guia, who was tagged in one of Guanzon’s posts, agreed.

Datumaas and Jabbar, however, said nothing was discriminatory about the ID system because it was their groups’ initiative.

Before Puma enforced the ID system in June on more than 400 Maranaos in Paniqui, it required Muslim transients to present their respective biodata and to submit themselves to visits.

“We don’t easily accept transients or settlers,” Datumaas said, adding that the IDs come in handy during transactions with the government and private companies.

“If you don’t have an ID, you cannot buy tickets for a ride on a plane or ship,” he said.

He also said the ID system was not directly related to the crisis in Marawi where the Islamic State-inspired Maute group seized the city on May 23, bombing it and holding and killing hostages. This prompted President Duterte to declare martial law in Mindanao.

“We just want to be sure that we won’t encounter problems with terrorists and other bad elements among transients,” Datumaas said.

“No one calls us ‘Maute Muslims’ but if any Maute [group member] comes, we will have to insist we are not part of the group. There are no bad elements in our ranks. We are traders trying to eke out a living in our host communities,” he added.

Puma and Umat issue ID cards to Muslims who have established permanent residences. These are given to people aged 15 and above in Paniqui and those aged 11 and above in Tarlac City. Some Muslims are required to present police clearances in case they have had previous brushes with the law.

The ID cards are signed by Puma and Umat leaders. “We are asking the mayor and the police chief to sign the cards so that these become official. Mendicants and [con men] cannot use these,” Datumaas said.

Jabbar said he was expecting the ID system in Paniqui and Tarlac City to be expanded because, he noted, no leaders of the more than 23,000 Muslims in Central Luzon opposed the proposal when it was presented at a forum organized here by the police and military on July 4.

According to Tarlac police, there are 3,447 Muslims in Tarlac City and in the towns of Capas, Concepcion, Camiling, Sta. Ignacia, Victoria, Moncada, Bamban, San Jose, Pura and Paniqui.

Senior Supt. Ritchie Medardo Posadas, Tarlac provincial police chief, said it was up to Muslim or non-Muslim organizations and communities to expand the scope of the ID system. —WITH REPORTS FROM PHILIP C. TUBEZA AND JULIE M. AURELIO IN MANILA