MMDA drawing up plan to develop a world-class Metro Manila 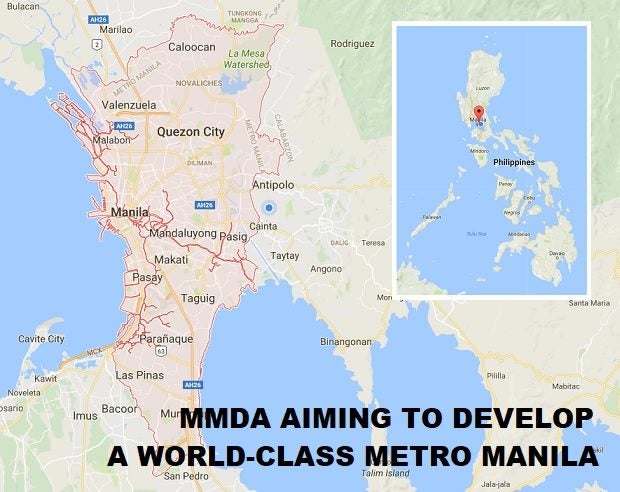 “We have completed a first draft for NCR’s sectoral assessment that will go into the RDP. We are now conducting bilateral consultations with different sectors as we delve into crafting crucial strategies for developing the country’s capital, guided by the overall Philippine Development Plan,”  Josefina Faulan, director for metropolitan planning, said in a statement.

The RDP will be anchored on MMDA’s Greenprint 2030, added Faulan.

Launched in 2012, Greenprint 2030 is a 20-year development plan in cooperation with the 17 NCR local government units (LGUs) aiming to develop the metro into a world-class region.

MMDA Chair Danilo Lim highlighted the importance of the PDP in addressing the traffic congestion in Metro Manila.

“It is only timely that we are discussing the PDP—of which, infrastructure development is a key part—as this is the best solution to the heavy traffic that we are experiencing in Metro Manila,” Lim said in a statement.

Data-aggregating website Numbeo ranked Manila as 6th in the world, 9th in Asia and 1st in Southeast Asia with the most time spent in traffic due to job commute, according to a statement made by the Department of Finance.

While roads, bridges and public transportation outlined in the PDP are important to alleviate traffic congestion, the support of Metro Manila’s mayors is just as important to make sure the plan is carried out in their localities.

Meanwhile, Aldwin Urbina of Neda gave updates on the Duterte administration’s 75 flagship infrastructure projects, with 35 of them situated in Mega Manila.

The Neda Board has approved six of these Mega Manila projects, he said.

Among these is the new configuration of the LRT Line 1 North Extension Project, which will be designed to accommodate up to 1.28 million passengers a day, and a national transport policy that will synchronize decisions and investments among all transport-related agencies at the national and local levels.

Rosemarie Edillon, Neda undersecretary for policy and planning, expressed the need for local government partners to fulfill plans of action detailed in the PDP.

“We hope to enlighten you to craft policies in your areas that will build a solid foundation for inclusive growth, a high trust society, and a globally competitive economy,” she said.