Too much food cramps space for Marawi evacuees | Inquirer News

Too much food cramps space for Marawi evacuees 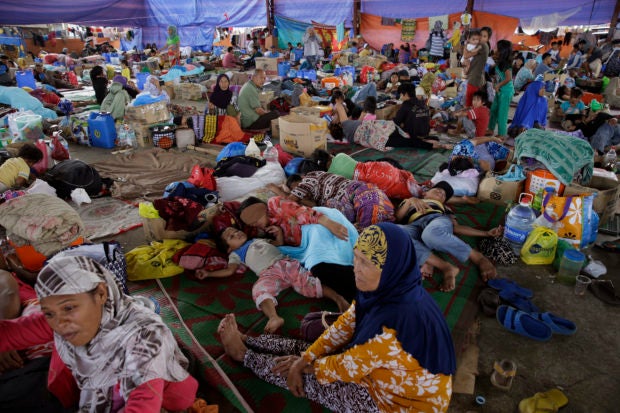 In this June 9, 2017, photo, evacuees stay at a crowded evacuation center on the outskirts of Marawi City, Mindanao. (AP Photo/Aaron Favila)

ILIGAN CITY — Evacuees at certain evacuation centers here and two provinces have been bickering over their shrinking living spaces.

“Blame it on the large volume of food they have been receiving since the crisis in Marawi City started,” said social welfare volunteer Mariam Calbe, also camp manager at Iligan City National School of Fisheries, which serves as an evacuation center.

Calbe said the 836 evacuees at the school in Barangay Buru-un regularly complained about neighbors keeping sacks of food they received the past weeks in the spaces they claimed.

“They say their neighbors were already intruding and that would start more bickering,” she said.

At the Maria Cristina evacuation center, camp manager Fatima Salbo said the evacuees had more than enough food that space had become a problem as more supplies arrived at regular intervals.

The Inquirer saw some families with fewer members than those of other households stocking up on rice and noodles and canned goods, which were kept in sacks.

Vice Mayor Mustapa Ali of Balo-i town also confirmed that the 990 evacuees in his area were not wanting in relief goods.

But at Mahad Al Nor in Ceanuri village here, Rohaira Ampa could only wish one of the supply trucks seen passing by on Friday stopped and social welfare volunteers had distributed food to her family and some 300 other families encamped in the Arabic school.

“It’s always like that. They would stop for a moment but then somebody would say they got the wrong place. I don’t know,” Ampa said.

But she said the evacuees were not starving though as some groups would also come and give them food.

“It is just that our supply would last only until the next group comes. But a relative staying in a larger evacuation center told me they had more food than they could probably consume in weeks,” she said.

Zia Alonto-Adiong, spokesperson for the Lanao del Sur crisis management council, said the council would look into the complaints.