From business to the battlefield 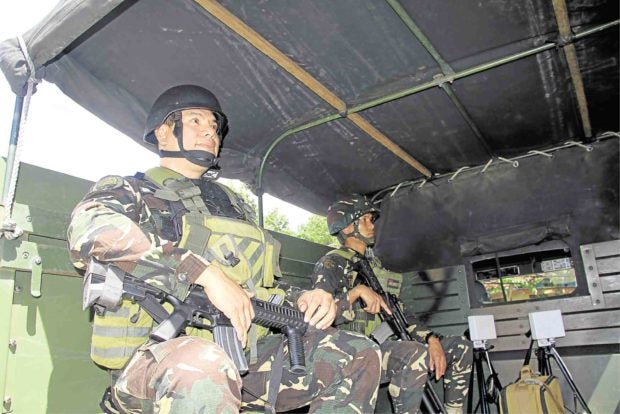 CITIZEN SOLDIER Almario (left) onboard a KM5 bound for the war zone in Marawi City.—RICHEL UMEL

MARAWI CITY — Entrepreneur Roberto Almario was attending to business in his comfortable Metro Manila office in May when he received a letter from the Armed Forces of the Philippines.

It was a summon for the 48-year-old businessman to report for active service as a lieutenant colonel in the Army reserve.

“I did not hesitate and accepted the 60-day call to active duty,” Almario told the Inquirer.

The telco industry executive is not alone in this urban war zone; two other reservists have been assigned here after being called to active duty.

“There are three of us reservists from Manila who are now on active duty here. One is a senior vice president of a bank, while the other is an IT expert,” Almario said.

Though their tasks here have to do with communications, Almario said he and the two other reservists have also been on the front line.

On the day the Inquirer spoke with him, Almario was dodging sniper fire along with regular Army officers who were leading a mortar attack against an enemy position in the heart of the city.

The father of two teenagers — aged 16 and 19 — said his life here was very different from that in Metro Manila.

“Last month, I was a businessman. Now, I’m a soldier,” said Almario, a graduate of the University of Santo Tomas.

He has become used to a soldier’s daily grind, including the rather alien reality of taking orders from superiors. “In Manila, I run a business; here, I just follow orders,” he said.

He has also gotten “used to eating sardines and to the smell of antimosquito coils at night,” he added.

Almario said his two children were worried sick after learning that he does not just sit in an air-conditioned office but also ventures into the battlefield on a regular basis.

“Everybody in Manila is worried but my wife has been very supportive,” he said.

Almario said wearing military fatigues was not really a novelty for him because of his Reserve Officers Training Corps (ROTC) in college and his involvement with the Army Reserve Command (Arescom).

But actual combat was an entirely different experience because “you have to learn how not to get hit.”

Added Almario:  “It’s a whole new learning experience for me and in my own little way, I get to help our troops. This is my first time (to go on active duty) and I’m glad the military utilized us.”

He has found new respect for soldiers because their life was anything but easy, said Almario, who said he was seeking an extension of his tour of duty.

Aside from Almario and his two fellow reservists from Manila, there are reservists from other places who are also helping in their own way, said Col. Alex Aduca, the commander of the Army’s 4th Mechanized Battalion based in Lanao del Norte province.

Aduca said those from Iligan City and other areas of Lanao del Norte were given various tasks, depending on their capabilities.

Older reservists who are under category C and D, including senior citizens, were assigned to relief goods repacking stations and to other lighter tasks.

“We have tapped them to augment our regular forces,” Aduca said. But he did not specify the number of reservists here and in other areas of Lanao del Norte.