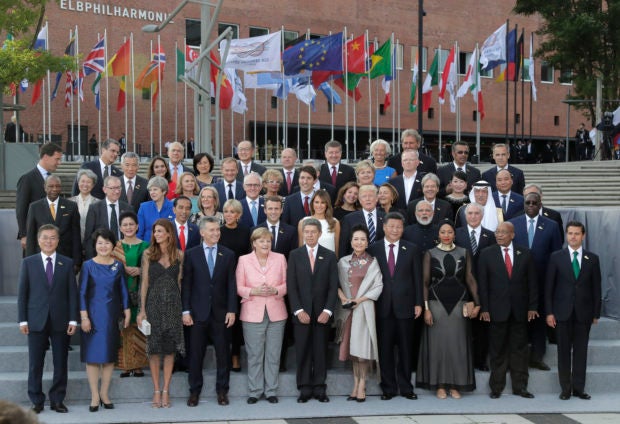 The G-20 participants and their spouses pose for a family photo in front of the Elbphilharmonie concert hall on the first day of the G-20 summit in Hamburg, northern Germany, Friday, July 7, 2017. The leaders of the group of 20 meet July 7 and 8. AP

HAMBURG, Germany—The G20 group of major economies agreed Friday to redouble efforts to tackle the financing of extremist groups, in a rare point of agreement during a fractious summit in Germany.

The countries issued a joint statement condemning the “scourge” of terrorism funding, and praised the work already undertaken to shut off sources of finance for illicit groups.

“We underline our resolve to make the international financial system entirely hostile to terrorist financing and commit to deepening international cooperation and exchange of information,” the statement said.

“We call on all member states to ensure that the FATF has the necessary resources and support to effectively fulfill its mandate,” they said.

“There should be no ‘safe spaces’ for terrorist financing anywhere in the world.”

A growing rift between the United States and other nations over trade and climate change has turned this year’s G20 summit — a normally ripple-free event in the diplomatic calendar — into one of the stormiest in the forum’s history.