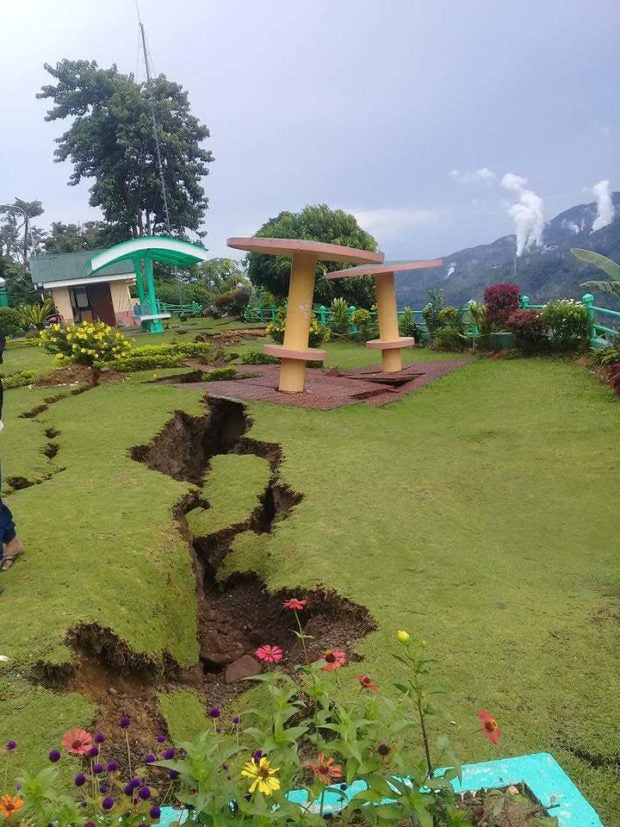 Cracks caused by the magnitude 6.5 earthquake on Thursday are visible in Barangay Tongonan, Ormoc City in Leyte. On the background are steams coming from the geothermal power plants ran by the Energy Development Corp. Photo courtesy of Cathy Ig-agao Pabganiban

The Energy Development Corp. has shut down its power plants spread in 14,000 hectares in Barangay Tongonan, Ormoc City, Leyte following the earthquake that rocked the province on Thursday.

“For now, all of the plants are shut down and we are evaluating the damage. We will have a more detailed assessment as more information becomes available,” said EDC president Ricky Tantoco in a statement issued on Friday.

The geothermal power plants in Leyte provided 460 megawatt of power to the Visayas grid before the earthquake hit at 4:03 p.m. on Thursday.

Aside from the plants, Tantoco said there was visible damage to their marshaling stations where the power from their plants was sent for transmission to the grid.

“We have mobilized our team of contractors who will be working 24/7, as may be permitted by safety considerations given that aftershocks are still being felt, to have the marshaling stations back in operation in 3 to 5 days,” he said.

Tantoco said they had accounted all its 502 employees and contractors on site although there were minor injuries reported.

“Meantime, we are providing generator sets to the towns of Kananga and Ormoc in coordination with the LGUs (local government units),” he said.

The blackout in Leyte as some of the Visayas had affected water supply.

Local officials appealed for generator sets to pump water from the wells.

EDC also sent out teams to Barangay Poblacion in Kananga to help the other groups in rescuing the six persons trapped in the rubble of a three-story building that collapsed after the quake.

The six had been pulled out late Thursday night.