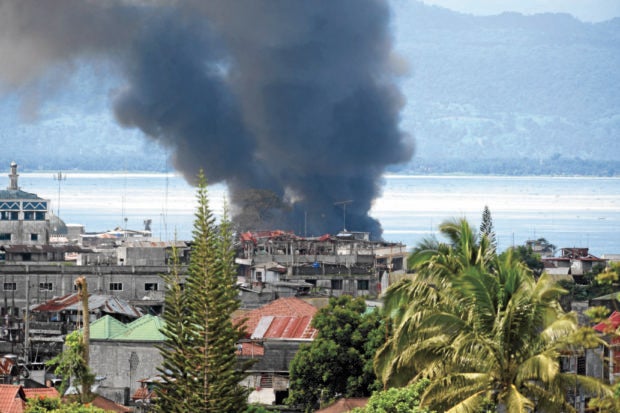 MARAWI CITY – The military’s death toll has climbed to 85 with the death of another soldier, as the fighting here entered its 45th day, Defense Secretary Delfin Lorenzana said on Thursday.

Lorenzana did not provide additional details but said that the military also suffered “many injuries” as the fight against the Maute group and its allies dragged on.

But he said the fighting has started to wane and might be over soon.

However, he clarified that only ground commanders could say when the city would be totally cleared of the terrorists.

Brig. Gen. Restituto Padilla, the Armed Forces spokesperson, said the number of slain terrorists rose to 351 as of Wednesday evening.

He said soldiers have recovered a total of 425 firearms already since the fighting started on May 23.

However, the military revised the civilian death toll from 44 to just 39.

Lt. Col. Jo-ar Herrera, the spokesperson of the Task Force Marawi, blamed the erroneous figures that the military had previously released to double-counting of cadavers.

Padilla said the military, while fighting the terrorists, also continued to pluck out trapped civilians and rescue hostages from the war zone.

As of Wednesday, he said a total of 1,722 have already been rescued by various military units.

Herrera said the military has been conducting clearing operations and recovery of cadavers from the war zone.

“The AFP remains committed to the decisive resolution of this rebellion to ensure that the Maute-Daeah/ISIS terrorist rebels and their supporters will not be able to pose a threat in any part of the Philippines,” Padilla said.  SFM