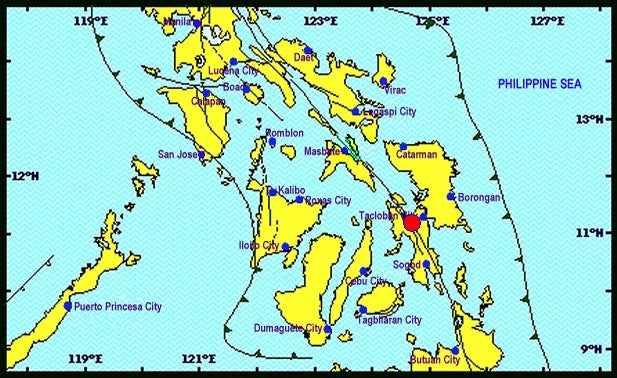 The quake centered eight kilometers southwest of Jaro town on Leyte Island, the Philippine Institute of Volcanology and Seismology said.

There were no immediate  injuries from the inland tremor that hit at a shallow depth of two kilometers.

Phivolcs said that damage was expected from the quake.

The agency said no tsunami warning was raised.

The National Disaster Risk Reduction Management Council reported that a brownout is being experienced in Tacloban City and Palo, Leyte.

He said he received reports that some buildings were damaged, adding that the quake also caused cracks on some roads in Valencia, Ormoc City. He said they are still verifying these reports.

The US Geological Survey initially placed the magnitude at 6.9.

It was felt in the following areas:

Based on the Phivolcs Earthquake Intensity Scale (PEIS), intensity V is strong and generally felt by most people indoors and outdoors. Strong shaking and rocking is felt throughout a building where hanging objects swing violently and dining utensils clatter. Small, light and unstable objects may topple over while liquids could spill from open containers. Vehicles can be observed to rock.

Intensity IV is moderately strong and may be felt by some people indoors and outdoors. The vibration felt is similar to that of a passing heavy truck and hanging objects swing considerably.Dinner, plates, glasses, windows and doors rattle while floors and walls of wood framed buildings creak. Standing motor cars may rock slightly while liquids in containers are slightly disturbed. A rumbling sound may sometimes be heard.

Intensity III is described as weak and is felt by people indoors, particularly those in the upper floors of buildings, and dizziness and nausea may be experienced by some. The vibration felt is similar to that of a passing light truck and suspended objects may swing moderately.

The Philippines sits on the Pacific “Ring of Fire” where continental plates collide causing frequent seismic and volcanic activity. With  reports from Jeannette Andrade and Agence France Presse.