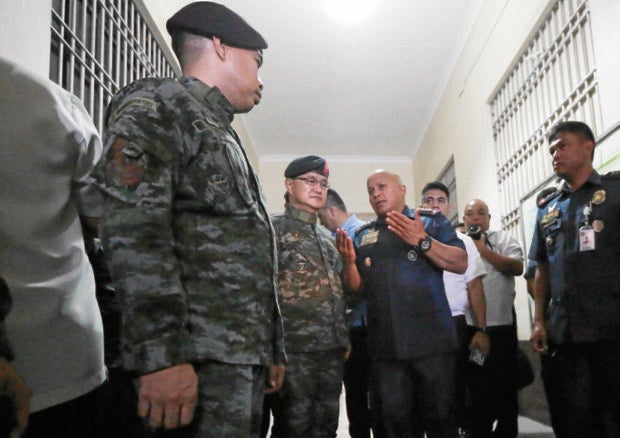 While saying that he does not believe the allegations, Philippine National Police chief Director General Ronald “Bato” dela Rosa has ordered an investigation into the suspected connivance between members of the PNP Special Action Force (SAF) and some inmates behind the resurging drug trade inside New Bilibid Prison (NBP).

During a surprise visit to the state penitentiary in Muntinlupa City on Wednesday, Dela Rosa assured the over 400 SAF men assigned there of his faith in their integrity.

“It’s not that I believe the allegation but I need to address it because it is very serious. We are not fighting an ordinary organized crime syndicate. This is drugs, a billion-peso industry that is being destroyed by our efforts. So it is but normal that they would get back at us by destroying us,” Dela Rosa said.

When he asked the SAF troopers if they were involved in the resurgence of the drug trade at NBP as alleged by Justice Secretary Vitaliano Aguirre, they replied in the negative.

According to Dela Rosa, he cancelled his morning commitments to address the “very serious allegation” against the unit, asking them: “If this is true, who can I depend on?”

“From the very beginning I told you, I can depend on nobody else at the PNP but you because you are the most disciplined. You are here to address the problem of illegal drugs at the NBP that is why I have strong confidence in you,” he said.

He pointed out that those involved in the multibillion narcotics industry would always attempt to destroy the PNP. “So continue discharging your job. Even if you are sad. Even if your morale is low. Show everyone that you are professionals.”

“I have nobody to replace you with. All our troops are engaged in Mindanao so you have to hang on. You disprove the allegation,” Dela Rosa said.

Aguirre, meanwhile, turned to the National Bureau of Investigation (NBI) for help in stemming the revival of the illegal drug trade at the NBP.

“I have said it before and I will say it again: We shall be relentless in fighting and eradicating the drug menace,” he said in a statement.

He also directed Gierran to prepare a report on the actions taken by the NBI to implement his order.

Read Next
Baby dies inside cabinet; druggie aunt arrested
EDITORS' PICK
On Day 2 of implementation, gov’t says workers now exempt from ‘no vax, no ride’ policy
Gear up and get ready to play with Yamaha Mio Gear
DOH: 28,471 new COVID-19 cases in PH; active cases now 284,458
Metro Manila posts lowest temperature yet this ‘amihan’ season at 19°C
Over 3 Million worth of prizes to be won at Smart Padala’s SENDali Manalo Promo!
Acer starts the year off strong with the Aspire Vero National Geographic Edition
MOST READ
Emma Stone calls Andrew Garfield a ‘jerk’ after he ‘lied’ about his ‘Spider-Man: No Way Home’ appearance
LOOK: Edu Manzano, Cherry Pie Picache enjoy Palawan with her son Nio Tria
Unvaccinated has rights but it has limits—DOJ
Retirements prompting major reshuffle in PH military
Don't miss out on the latest news and information.