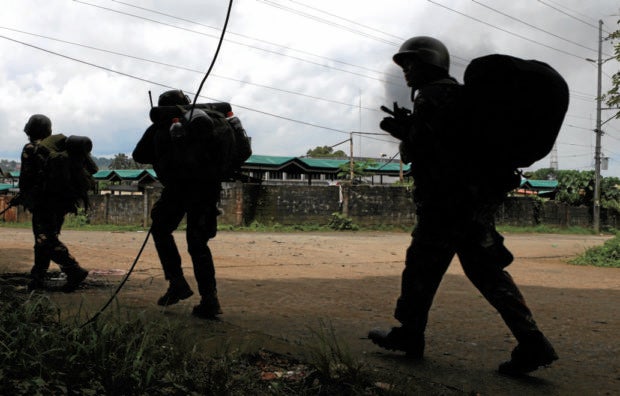 Soldiers conduct clearing operations in Marawi City in a file photo taken on June 30, 2017. The Armed Forces of the Philippines sent more troops in the battle zone of Marawi in Lanao del Sur to flush out members of Islamic State-inspired terrorists that still occupying four villages. INQUIRER.net

COTABATO CITY—After thorough verification and validation of their background and identities, police here released four persons who were invited for questioning for having Maute as family name.

Supt. James Allan Logan, Criminal Investigation and Detection Group in the Autonomous Region in Muslim Mindanao (CIDG-ARMM) regional director, said the four were invited for questioning over the weekend after the military personnel found them to have Maute for family name.

Logan said the local government unit of Marogong, Lanao del Sur confirmed that Alimatar, Apok, Saida and Mohammad Ali, all surnamed Maute had all been cleared of any relationship, by blood or by affinity, with the Maute terrorist group.

The Mautes, Logan said, presented documents showing they were law-abiding citizens and went to Cotabato City to apply for clearance from the National Bureau of Investigation (NBI).

Apok, on the other hand, was a retired school principal, also in Marogong.

Speaking to reporters, Logan said the Mautes, while in CIDG-ARMM custody, were treated well and were not placed inside a jail cell. JPV