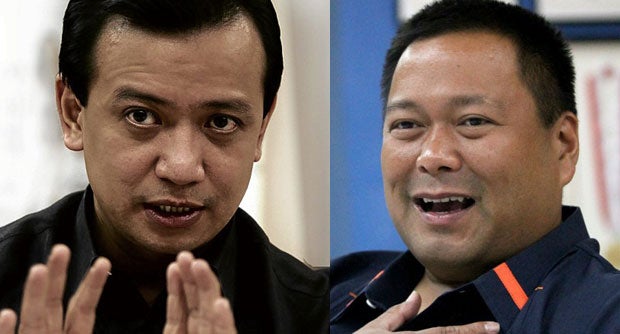 This was how Senator Antonio Trillanes IV responded on Tuesday to Senator Joseph Victor “JV” Ejercito’s statement that his actions should be referred to the Senate committee on ethics.

“Maybe it is high time that we refer to the Senate Ethics Committee Sen. Trillanes’ actions since he is becoming damaging to the institution, and becoming destructive to the country,” Ejercito said in a statement.

Sought for comment, Trillanes said he would welcome any ethics complaint that would be filed against him in the Senate.

“But here’s the thing, if Sen. Ejercito believes that my statement that the Senate is becoming a lapdog of the Duterte administration is highly offensive yet sees nothing wrong with Duterte’s rape comments to the soldiers, then we really have a problem,” said Trillanes, a staunch critic of Duterte.

The opposition senator was apparently referring to Duterte’ s remark in May where he told soldiers implementing martial law in Mindanao that he would take responsibility if they rape women.

(“I will go to jail for you. If you happen to have raped three women, I will own up to it. If you marry four, son of a bitch, you will get beaten…”)

On May 23, the President placed the entire region of Mindanao under martial law as fighting erupted between government troops and the Maute terrorist group. JPV