In Iloilo, 2 pictures of drug war are emerging 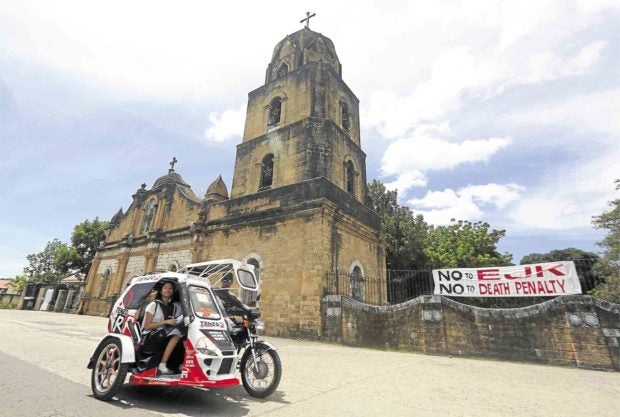 A tarpaulin protesting alleged summary killings in the war on drugs is displayed at Guimbal Church in Guimbal town, Iloilo province, which President Duterte has described as a key drug area. —NIÑO JESUS ORBETA

President Rodrigo Duterte continued to describe Iloilo as a key transit point for drugs even as police with jurisdiction over the city and province presented a different picture — one of success in the antidrug campaign.

In his 27-minute speech at ceremonies for the 120th anniversary of the Presidential Security Group (PSG) on June 28, Mr. Duterte described Iloilo as a “bedrock” of the narcotics trade in the Visayas.

Last year, he tagged the Western Visayas capital as “most shabulized.” It wasn’t clear, however, whether he was referring to Iloilo the city or the province.

It appears the President’s perception of Iloilo as a key drug link hasn’t changed even as officials of the regional police defended their record in the antidrug campaign.

But Binag said if numbers were to be given a closer look, the regional police office hadn’t done bad in the war on drugs.

From June 27 to July 1, regional police arrested 1,742 drug suspects, according to Binag.

At least 30 suspects had been shot dead in police operations, he added.

A drug rehab program of the regional police, according to a police report, processed 944 users and pushers who had surrendered.

During his speech at the PSG anniversary, Mr. Duterte said Iloilo had become a key transit point for drugs and from there, drugs “have spread to the Visayas.”

“It involves the mayors and the gangs there,” the President said. Mr. Duterte gave no further details.

He also named former city councilors, lawyers and policemen, including high-ranking officers in Western Visayas.
No criminal complaints had been filed against the mayors.

In a report, the Philippine Center for Investigative Journalism said Western Visayas was seventh of 18 regions in the number of villages where drugs were rampant, quoting data from the Philippine Drug Enforcement Agency and Dangerous Drugs Board.

In April 2017, Western Visayas was eighth in the number of villages influenced by drugs, the same report said.