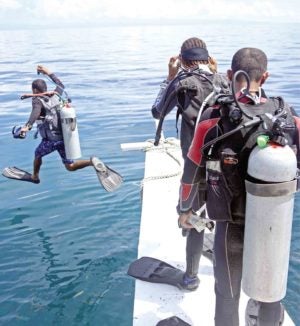 Divers in Cebu continue the search for the body of Bien Unido Mayor Gisela Boniel, who was allegedly kidnapped and murdered by her husband, Board Member Niño Rey Boniel.—LITO TECSON/CEBU DAILY NEWS

CEBU CITY — Lawyers defending a Bohol provincial board member on a case of murdering his wife, a town mayor, and committing illegal detention in the process are asking for a consolidation of the cases against their client, citing a “security nightmare.”

Lawyers of Bohol Board Member Niño Rey Boniel said they would ask the courts to merge the cases of parricide and illegal detention against Boniel for convenience.

Niño faces trial for the murder of his wife, Gisela, mayor of Bien Unido town in Bohol, a post he once held.

“It will be a security nightmare if he have to cross from Cebu to Bohol again and again,” said Gerry Carillo, a member of Niño’s legal defense team.

“So it will be best for the parties to consolidate the cases,” Carillo said.

He said the defense panel would leave it to the courts to decide where trial for the two cases against Niño would be held.

A panel of government prosecutors filed parricide charges against Niño at the Regional Trial Court (RTC) in Lapu-Lapu City, Cebu on Friday for the murder of Gisela.

Police said Niño killed Gisela and dumped her body into the sea between Cebu and Bohol.

Her body has not been found, however, which Niño is using as an argument to fight the murder case against him.
Niño claimed Gisela is still alive and in hiding to evade debt collectors.

Gisela, Niño claimed, had incurred millions of pesos in debts.
In a resolution on June 28, government prosecutors said details of the cases were better taken up in trial.

Two of Niño’s alleged accomplices — Wilfredo Hoylar and Restituto Magoncia — had been charged with murder for involvement in the killing of Gisela.

Reolito Boniel, Niño’s cousin, and driver Randel Lupas had been indicted for murder after they waived their right to a preliminary investigation and confessed to their roles in the murder.

Their findings were approved by Lapu-Lapu City Prosecutor Ruzo Zaragoza.

Lawyer Carillo said the ruling of the panel of prosecutors did not come as a surprise.

“We actually expected that,” he said, adding that the prosecutors were simply fulfilling a duty to find a basis to bring the cases against Niño to court.

“We’re ready for trial. As I have said, the real fireworks happen during trial,” Carillo said.