Impeachment bids and rights issues: Cases vs Duterte in his first year 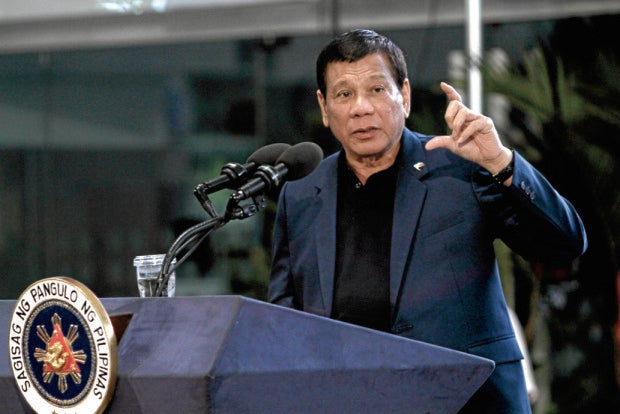 With only one year in office, President Rodrigo Duterte has been accused of massive human rights violations with his war on drugs as well as anomalies committed while he was still mayor of Davao City.

Despite enjoying immunity from suit, he remains at the receiving end of an impeachment case, a plunder and graft complaint and a case before the International Criminal Court (ICC).

His critics remained bent on making him face the law for his alleged crimes that started when he was mayor of Davao City.

Early last year, Senator Antonio Trillanes IV filed a complaint for plunder and violation of the Anti-Graft Law against the President for allegedly hiring ghost employees at the Davao City Hall when he was mayor.

So far, records from the Ombudsman showed that this is the only complaint against the President undergoing investigation.

The last case filed against him in 2012 underwent fact-finding investigation but was declared closed and terminated in 2014, two years before he become President.

Ombudsman Conchita Carpio-Morales, during last year’s alumni homecoming at the University of the Philippines College of Law, explained that the investigation continued because the complaint was filed before Duterte became President.

“Under the law, even if a person has immunity or even if he is impeachable, you still continue the investigation for purposes of determining whether there is misconduct,” Morales explained. She, however, clarified that she has inhibited herself from the case because of her relation to Duterte. She is the sister of Atty. Lucas Carpio Jr., the husband of retired Court of Appeals Associate Justice Agnes Reyes-Carpio whose son is the husband of Davao City Mayor Sara Duterte.

This is not the first time that the Office of the Ombudsman under Morales investigated an official who enjoys immunity from suit.

Her office also conducted an investigation on the complaint filed against then Vice President Jejomar Binay. Cases for graft and malversation were filed with the Sandiganbayan after he lost the presidential race in 2016.

Then, Atty. Jude Sabio, lawyer of self-confessed hitman Edgar Matobato, filed a complaint before the International Criminal Court (ICC) a complaint against Duterte and 11 other government officials for the murders committed by the Davao Death Squad (DDS) to the extra-judicial killings of suspected drug users and pushers.

Sabio requested that the ICC analyze the mass killings in the country, summon Duterte and his senior officials and eventually issue a warrant for their arrest.

Aguirre said the filing of the complaint was amusing.

“The camp of Matobato and Sabio apparently threw a net in the sea with this case and want to see how many fishes they can catch before the ICC. Sorry to disappoint them this early, they will catch none. Their case is substantially and procedurally infirm and bereft of merit,” Aguirre said in a statement.

The justice chief believed that there are people behind Matobato and Sabio.

“These destabilizers do not want the Filipino people to have a drug-free future. They hate it when the greater majority of our countrymen benefit from the many gains of the Duterte administration,” Aguirre said.

Calida, on the other hand, said Sabio should be disbarred for his actions. He also maintained that the ICC has no jurisdiction on the matter.

To date, the ICC has not acted on Sabio’s complaint.

A search on the ICC’s website https://www.icc-cpi.int to check on status of cases and complaints filed yielded zero result on Duterte. Its calendar also does not indicate any action on the complaint against Duterte and his senior officials.

If there is one break that the President can enjoy for now, it is the bid to impeach him from office.

Congress, composed mostly of allies of the President has dismissed the complaint.

Under Article XI Section 3 paragraph (5) of the 1987 Constitution, “no impeachment proceedings shall be initiated against the same official more than once within a period of one year.”