CHR: We’re after abuses by gov’t, not crimes by ordinary civilians | Inquirer News

CHR: We’re after abuses by gov’t, not crimes by ordinary civilians 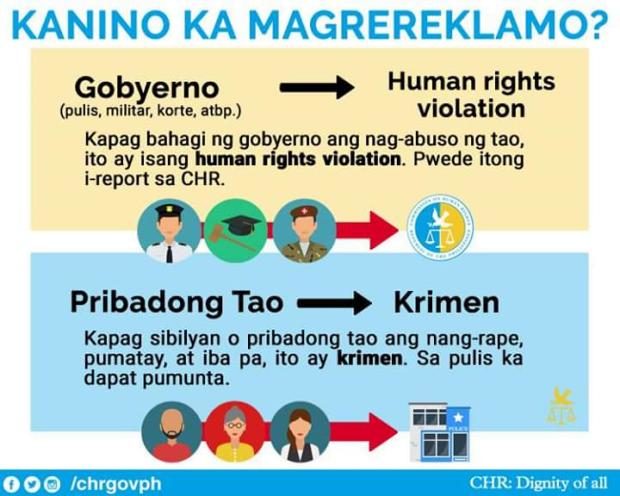 The Commission on Human Rights (CHR) has finally set the record straight – at least among netizens – of what their mandate really is.

In a widely circulated infographic posted on social media site Facebook over the weekend, the CHR explains that its function us to be “the conscience of the government.”

“It is the CHR’s duty to protect the citizens’ rights from abuses by the state, such as the [civilian] government, police, and military,” the CHR said in Filipino, in a statement accompanying the graphic.

“It is the mandate of the CHR to ensure that there will be no abuse or negligence on the part of the government in protecting and upholding the rights of all the citizens, especially those in the margins,” the statement added. “Each branch of government has a duty to observe and fulfill the rights and the needs of the citizenry. But if it is the state or the government itself that violates or denies human rights, that is when the CHR will act as the conscience of the government.”

On the other hand, it’s the police who would handle crimes committed by people who are not public officials, the CHR stressed: “If it is a civilian or private person who did the crime, such as killing or rape, it is the Philippine National Police (PNP) who has the duty and mandate to take action.”

The CHR was created under Article 13, Section 17 of the 1987 Constitution and granted specific powers and functions under Sec. 18.

Despite being constitutionally mandated, however, the CHR still has to struggle against longstanding public misconceptions about its mandate, especially under the present administration which has “demonized” human rights advocates for criticizing the war on drugs.

“Everytime we talk to the media about this or that killing, look at social media. We are immediately accused of being protectors of criminals,” CHR Commissioner Roberto Eugenio Cadiz lamented, in a recent interview with the Inquirer.

“One senator even sent us a pile of cases challenging us to investigate carnappings, kidnappings. And he’s already a senator. They don’t understand that the CHR is not the police,” he said.

Cadiz explained that under traditional definitions, human rights violations are committed by the state. “There’s another school of thought that violations can be committed even by non-state actors, but in terms of operationalizing the concept, as far as the mandate of the CHR is concerned, most cases we are investigating involve alleged violations of the state.”

“We are not against the government peace and order program, not against going after drug syndicates. What we are against are the shortcutting of processes, such that innocent people merely accused are killed by the wayside in this campaign,” Cadiz said.

“We put pressure not for the purpose of harassing or embarrasing our government, but for making them accountable so human rights violations don’t continue,” Cadiz said.

Cadiz also noted that the government had the obligation to investigate and even resolve the reported cases of summary killings.

“Under the laws, specifically, under the Revised Penal Code and the Rules of Court, when you shoot someone and invoke self-defense, it is you who has to prove [you acted in] self-defense. You cannot say ‘you should presume I acted in self-defense,’” Cadiz said.