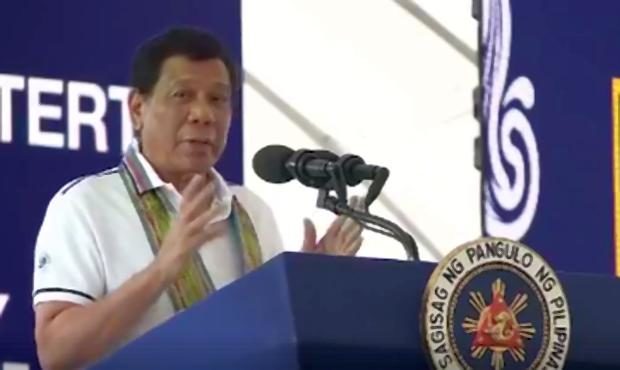 President Rodrigo Duterte delivers a speech at the Sports and Tourism Complex in Tagum City to mark the 50th founding anniversary of Davao del Norte on Saturday, July 1, 2017. (Photo from an RTVM video)

President Rodrigo Duterte on Saturday slammed human rights groups for turning a “blind eye” to victims of criminals as he cursed the suspect in the massacre of a family in Bulacan.

In speech before local officials in Tagum City to mark the 50th founding anniversary of Davao del Norte, a fuming Duterte narrated the massacre of the family of Dexter Carlos, a bank security guard, in his house at North Ridge Royale Subdivision in San Jose Del Monte, Bulacan.

“I killed all of them. I hope you forgive me,” he said in Filipino.

The President also accused human rights group for turning a “blind eye” to victims of criminals.

“And you know that every day, as there is an addict that is killed, there is also an innocent person who is held up, ma-holdapan, mamatay…and these idiots just turn a blind eye,” he said.