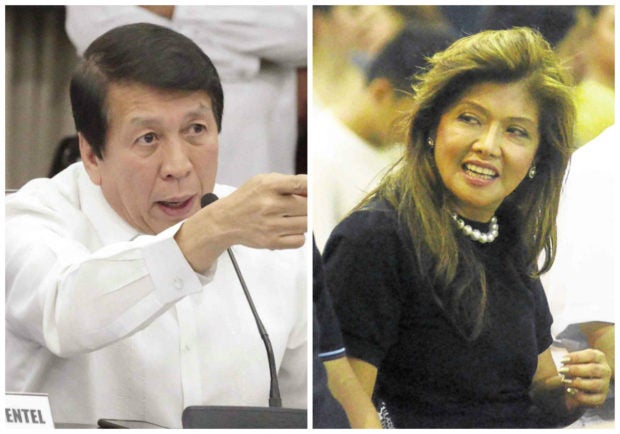 LAOAG CITY—As political kingpins of Ilocos Norte province, the Marcos and Fariñas clans have wielded political power while nurturing a peaceful coexistence since the 1980s when the late strongman Ferdinand Marcos ruled the country.

Farinãs began his political career when he was elected Laoag mayor in 1980 at the age of 28, making him one of the youngest elected city mayors at that time.

In the 1988 elections, Fariñas posted a landslide victory as Ilocos Norte governor. Reelected in 1992 and 1995, he served as governor for 10 years.

During Fariñas’ last term as governor, he was politically aligned with the former President’s daughter, Imee Marcos, who served as representative of Ilocos Norte’s second district.

After serving as governor, Fariñas ran and won as representative of the first district serving for a term, from 1998 to 2001.

In the 2007 elections, Michael Keon, a nephew of Ferdinand Marcos, ran and defeated Fariñas for governor.

Naturally, Keon was backed by the Marcoses.

But three years later, in the 2010 elections, Fariñas and Imee resumed their alliance.

Imee asked but failed to convince her cousin, Keon, to withdraw his reelection bid, so she ran—and won—against him.

She also asked Fariñas to run for representative in the first district under her ticket.

At the time, the Marcos clan was dealing with a problem when Imee supported the presidential bid of Manuel Villar of Nacionalista Party.

Among the candidates in that election was Gilberto Teodoro Jr., a former defense secretary and nephew of businessman Eduardo “Danding” Cojuangco Jr. Cojuangco is a close ally of Imee’s father, the late President Marcos.

Keon also threw his hat into the mayoral race but he later withdrew in favor of Chevylle.

Fariñas supported his brother, Roger, who ran with his son, Carlos. They were defeated by Chevylle and Michael who were backed by Imee.

The Fariñas clan ended their feud after the death of Fariñas’ son, Rodolfo Jr., in a road accident in 2015.

At this time, Ilocanos were talking about the Marcos family’s attempt to dominate Ilocos Norte through its political group, One Ilocos Norte.

Almost all Marcos-backed candidates in the two cities and 21 towns of the province won in the 2016 elections.

In May 2015, Imee officially informed the Commission on Elections that she had become a resident of Barangay 47 Bengcag in Laoag.

In September 2015, the sons of former Sen. Ferdinand “Bongbong” Marcos Jr.—Ferdinand “Sandro” Alexander III, 23, Joseph Simon, 22, and Vincent, 20—registered as voters of Laoag. The former senator has a house in Barangay Suba here.

The board has been addressing reports of a feud between Ria and some board members. Board Member Vicentito Lazo was quick to dispute these, saying, “We are not doing anything to Ria.”

But the board members did not support Fariñas’ daughter when she ran for president of the Provincial Board Members’ League of the Philippines on Feb. 28.

Last year, a scandal broke out in Laoag over the missing P85 million from the city treasury.

The provincial board had urged the Office of the Ombudsman to investigate and determine the city officials whom should be prosecuted for the loss.

The tussle between the clans of Fariñas and Marcos came to a head in May when the House committee on good government and public accountability began its investigation of the alleged misuse of P66-million worth of the province’s tobacco funds in 2012.

The inquiry led to the detention of six Ilocos Norte capitol employees, and a threat to detain Imee.

In a regular session on Tuesday, eight board members declared Fariñas persona non grata, prompting him to threaten them with a lawsuit.

Reports in the province showed that former First Lady and now Ilocos Norte Rep. Imelda Marcos had been trying to open a dialog to keep the Fariñas and Marcos clans from breaking the ties that bind the two political powerhouses.