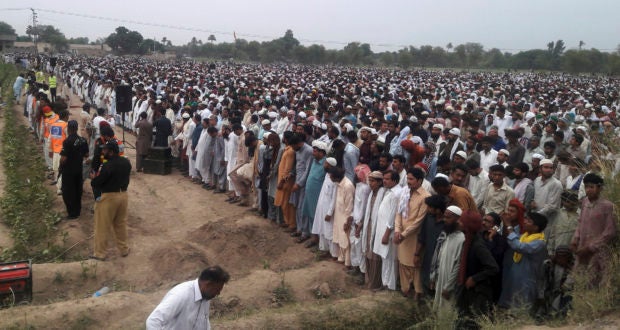 People offer funeral prayers for the victims of Sunday’s fuel tanker fire incident in Bahawalpur, Pakistan, Tuesday, June 27, 2017. Thousands of mourners in Pakistan have attended the collective funeral for victims of a massive fuel tanker fire on a central highway earlier this week. (AP Photo/Iram Asim)

MULTAN, Pakistan—A Pakistani government official says the death toll from a massive fuel truck fire earlier this week has climbed to 190, after 17 more people died in hospital from severe burns.

Rao Taslim Ahmad, a deputy commissioner in the city of Bahawalpur in central Pakistan, says some of the victims who were rushed to hospitals following the blaze were still in critical condition on Friday.

The disaster struck early on Sunday outside Bahawalpur when the driver of the oil tanker, which was en route from the southern port city of Karachi to Lahore, lost control and crashed on a highway.

The fuel ignited when villagers rushed to the scene to collect the spilled oil, ignoring warnings from police.

Pakistan held a collective funeral for 130 of the victims on Tuesday. JPV