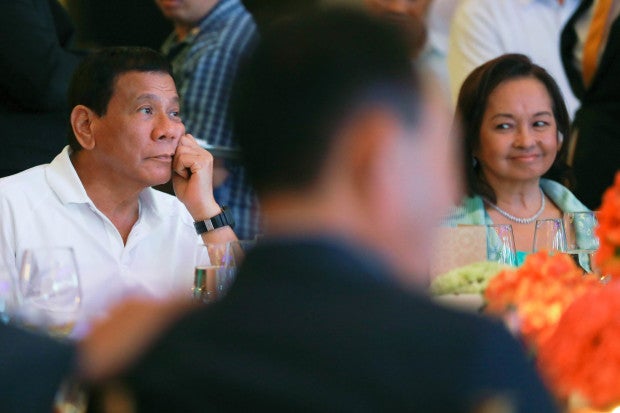 Former President Gloria Macapagal Arroyo gave a glowing review of President Rodrigo Duterte’s freshman year in office, praising his bold reforms and his ability to “inspire and unite” the people.

“President Rodrigo Duterte has shown awesome leadership and resolve in the many programs that he promised to do during his presidency,” the Pampanga congresswoman said in a statement on Friday.

“In his first year, he managed to institute various bold reforms against illegal drugs and corruption. His Build, Build, Build initiative is commendable and is a step in the right direction towards achieving inclusive growth,” she added.

But Arroyo, whose nine-year presidency was marked by political turmoil sparked by election cheating and corruption allegations, said Mr. Duterte succeeded the most in inspiring and uniting the Filipino people.

“More than his accomplishments in his work as President, President Duterte has achieved to inspire and unite the Filipino people towards his goal of effecting real change for the country,” she said.

“I wish him success and the best of health for the rest of his term as he fulfills his mandate for the nation and for the people,” Arroyo said.

Shortly after his election, Mr. Duterte has sought to cultivate a close relationship with the former President, appointing many of her former subordinates, seeking her counsel and inviting her to official functions.

Arroyo was made a Deputy Speaker at the House, but lost her post after she voted against one of the Duterte administration’s priority bills restoring the death penalty for major drug offenses.

Read Next
Patient shoots 2 at Las Vegas pain clinic, kills himself
EDITORS' PICK
97% of COVID-19 beds at PGH currently occupied
Gear up and get ready to play with Yamaha Mio Gear
Acer starts the year off strong with the Aspire Vero National Geographic Edition
Japan brings back virus restrictions over Omicron surge
Over 3 Million worth of prizes to be won at Smart Padala’s SENDali Manalo Promo!
Uproar over no vax, no ride policy: Maybe it’s time for gov’t to say sorry—Bello
MOST READ
1Sambayan names 7 aspirants in its 2022 Senate lineup
Emma Stone calls Andrew Garfield a ‘jerk’ after he ‘lied’ about his ‘Spider-Man: No Way Home’ appearance
Guevarra to Acosta: Obey rules on unvaccinated
Commuters affected by ‘no vax, no ride’ policy may file class suit —Lacson
Don't miss out on the latest news and information.