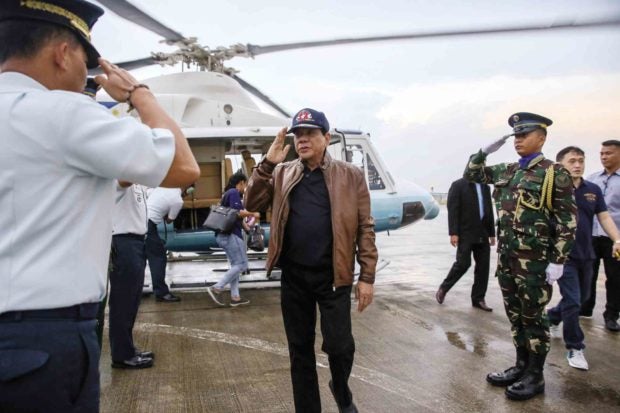 President Rodrigo Duterte salutes as he was about to leave for Davao City at the Villamor Air Base in this file photo taken on June 15, 2017. (Photo from Malacañang)

Duterte has been heavily criticized for his unprecedented crackdown on drugs, which has claimed thousands of lives, and he marks 12 months in office enduring the biggest crisis of his rule as Islamist militants Maute group, which has pledged allegiance with the Islamic State (IS), occupy parts of Mindanao.

The 72-year-old President has also upended decades of foreign policy stability, launching verbal bombs against traditional ally, the United States, while steering the Philippines closer to authoritarian regimes in China and Russia.

Yet an overwhelming majority of Filipinos support him, according to a series of surveys by pollsters over the past 12 months, with the most recent one showing 75 percent were satisfied with his administration’s performance.

“People may disagree with his policies, or are maybe ambivalent towards them, but because they like him, people will tend to give him the benefit of the doubt.”

Many people overseas know Duterte for his apparent joy in prosecuting his drug war—he said he was “happy to slaughter” millions of addicts—as well as gutter language in which critics are frequently called “sons of whores.”

But many Filipinos look past the crass talk and see a down-to-earth, anti-establishment figure who empathizes with their struggles and is willing to take extreme actions to make dramatic change across all sectors of society.

“He brought an entirely new style of leadership, which people probably thought we needed,” Edmund Tayao, a political science professor at the University of Santo Tomas, told AFP.

In his inauguration speech, Duterte typically sought not to sugarcoat his plans for the Philippines.

“The ride will be rough. But come join me just the same,” Duterte said.

The roughest part of the ride had for most of the past year been his crackdown on drugs.

Unknown assailants killed another 2,098 people in drug-related crimes, while there were 8,200 more murders with no known motive, according to the police.

Rights groups and other critics warned Duterte may be orchestrating a crime against humanity, alleging he had unleashed corrupt police and vigilante death squads on a campaign of mass murder.

Duterte had made the drug war the top focus of his presidency until May 23, when gunmen rampaged through the southern city of Marawi flying black flags of the Islamic State group.

He immediately imposed martial law across the southern third of the Philippines, home to roughly 20 million people, to quell what he said was an IS bid to establish a local caliphate.

But despite a relentless bombing campaign backed by the United States, Duterte’s military has been unable to dislodge the militants. The fighting has claimed more than 400 lives, according to the government, and it shows no signs of ending.

Another example of Duterte’s popularity is his “super majority” in the lower house of congress, where there are just seven opposition members in the 296-member chamber.

Even one of the opposition lawmakers, Edcel Lagman, offered grudging praise this week.

“Despite his unpresidential demeanor, profane language, abusive rhetoric and flawed policy statements, President Rodrigo Duterte, in his own inscrutable way, has held the nation together,” he said.

But Lagman said, with Duterte’s promises of “change” yet to become reality, his popularity had started to slide.

If that is happening, Duterte’s “super majority” could fall apart.

In the Philippines, lawmakers from parties across the political spectrum typically flock to a popular president in the early stages of his or her term.

But the politicians, driven by self-interest rather than ideology, have also in the past quickly jumped off the bandwagon when approval ratings dropped. JPV/rga