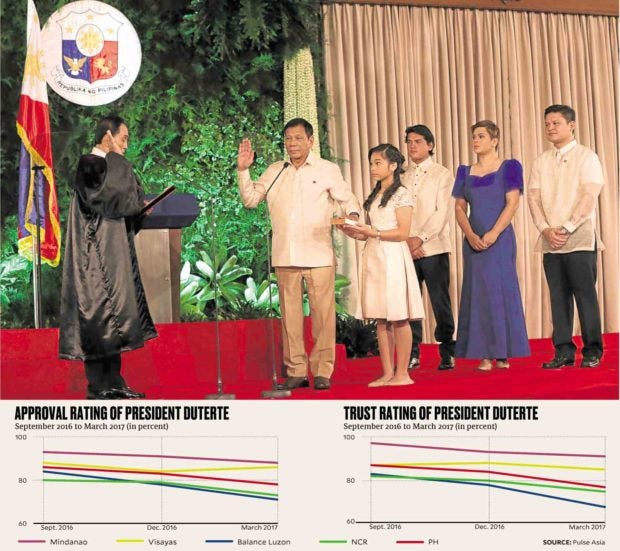 PRESIDENT’ S OATH Exactly a year ago, Rodrigo Roa Duterte took his oath to serve as the highest official of the land before Supreme Court Justice Bienvenido L. Reyes in a ceremony attended by his
children.—MALACAÑANG PHOTO

President Duterte brought to Malacañang the popularity he enjoyed as a longtime Davao City mayor after he won the 2016 presidential election.

Like so many things, what goes up must come down. In the case of Mr. Duterte, his popularity ratings saw slight declines from September last year to March this year but his ratings were still relatively high, according to surveys conducted by Social Weather Stations (SWS) and Pulse Asia Inc.

Last September, the President’s approval and trust ratings in Pulse Asia surveys were at their highest, both at 86 percent.

Huge approval of and trust in the President were recorded in Mindanao, his bailiwick, with an approval rating of
93 percent and trust of 96 percent.

It was a similar trend across socioeconomic classes, with double-digit declines in Class E (11 points) from last September to last December.

The President’s net satisfaction rating (satisfied minus dissatisfied) in an SWS survey last September was a “very good” +64. It slightly declined to +63 last December and March this year.

As expected, Mindanao had the highest satisfaction rating of “excellent” +85. It dropped 11 points last December to +74 but rose to +87 in March.

The President’s trust ratings in the SWS surveys had significant movements. Last September, he got an “excellent” net satisfaction rating of +76, which decreased to +70 in March.

In the Visayas, his trust rating was an “excellent” +73 last September. It declined to a “very good” +63 in March.

Trust in the President among Mindanaoans was an “excellent” +92 last September, but it went down 7 points to +85, before it increased to +89.

Satisfaction with the Duterte administration had no significant movements between last September and March, except in Class E. It increased by 7 points from a “very good” +62 last September to +69.

Last September, the administration’s performance in its war on drugs had a net satisfaction rating of +76. It barely moved last December to +77, but dropped to +66 in March.

Among the regions, Metro Manila had the highest increase in hunger incidence from 7.3 percent last September to 12 percent in March.

SWS said joblessness last December was the worst in two years at 25.1 percent, which slightly went down to 22.9 percent in March.

In SWS surveys, respondents were satisfied the most with the government’s performance in helping the poor,
giving it a rating of “very good” +63 last September and +66 last December.

The issue of fighting inflation got the least score in March, with a “moderate” +13.

In Pulse Asia surveys, increasing the pay of workers remains the issue deemed most urgent by Filipinos, while fighting criminality had the highest net approval rating from September to March. —INQUIRER RESEARCH