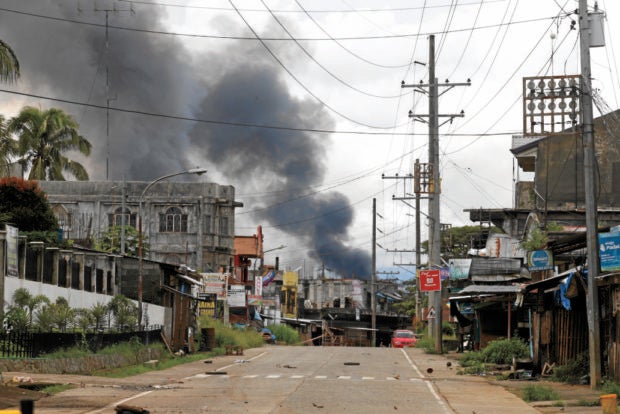 In this picture taken June 29, 2017 shows smokes billows inside Malawi City as the military launched fresh airstrikes on controlled positions of Islamic State-inspired terrorists as fighting rages for 36 days now.

Distraught housewife Camalia Baunto’s husband is trapped in their house in Marawi City and she is pinning her hopes of being reunited with him on President Duterte’s vow to crush a small band of Islamic State (IS)-linked terrorists who have brought destruction to the once proud Muslim city in Mindanao.

The Baunto couple, along with their extended family, voted for Mr. Duterte in 2016, helping to propel the former Davao City mayor to the country’s top government post on a promise to bring peace and order to a region long ravaged by armed conflict.

But that promise has been overtaken by deadly events. Abu Sayyaf gunmen, the Maute group and their foreign allies, who have all pledged allegiance to IS, launched a daring raid on Marawi on May 23.

After more than a month of fighting, the death toll has surpassed 400—303 IS gunmen, 75 soldiers and police, and 44 civilians, according to military figures.

An estimated 200 residents, including Baunto’s husband Nixon, are believed to be held hostage by the gunmen or trapped in the fighting that has transformed the once-vibrant city into a desolate landscape of bombed-out buildings resembling war-torn Aleppo in Syria.

“I am losing hope,” Baunto told the Inquirer. “I am begging the President to rescue him. Is this the peace he had promised us?”

In reaction to the siege, Mr. Duterte declared martial law in the entire Mindanao while he was on a visit to Russia with all his top defense and security officials and cut short his trip to return home.

The President said he would not allow IS to gain a foothold in the Philippines.

The siege of Marawi was triggered by an attempt by security forces to arrest Isnilon Hapilon, the leader of an Abu Sayyaf faction who had been appointed by IS emir, or leader, in Southeast Asia.

The Army’s 1st Infantry Division spokesperson, Lt. Col. Jo-Ar Herrera, said at first that Hapilon was backed by 15 gunmen, but as the firefight escalated, hundreds of others emerged from their hideouts around the city, engaging the surprised troops.

Analysts said that since Mr. Duterte assumed office last year, his administration appeared to have focused much of its resources into carrying out a war on drugs, which had  left at least 10,000 suspected drug users, dealers and traffickers dead.

Officials have neglected the telltale signs of Islamic radicalism among a new crop of Islamists in Mindanao, analysts said.

Richard Javad Heydarian, a political analyst at De La Salle University, said the Marawi conflict “puts into focus whether [Mr. Duterte] has a proper appreciation of the sheer scale of the problem in his own backyard.”

“Without a doubt, the siege of Marawi has been the greatest crisis for Mr. Duterte so far, despite the myriad of controversies surrounding his key policies, including the bloody war on drugs and diplomatic spats with traditional allies,” Heydarian said.

“We are not only talking about the prospect of a distant caliphate under the flag of Isis, but a potentially disastrous contagion of terror across his home island of Mindanao,” he said, using another name for IS.

The destruction of Marawi will likely “undercut his sky-high approval ratings, particularly among Moros, who initially saw him as their sole and most powerful voice in imperial Manila since the founding of [the] Philippine republic,” Heydarian said.

The Marawi siege also forced the government to reassess its “independent” foreign policy that had seen Mr. Duterte lambast the Philippines’ traditional ally, the United States, in favor of Russia and China.

“In many ways, it has been a sobering and heart-wrenching month for a President who sincerely cared for the people of Mindanao, yet didn’t manage to fully optimize existing intelligence and security networks to anticipate, prevent and effectively contain the terrorism conundrum in his home island,” Heydarian said.

Mr. Duterte’s “fixation on the war on drugs” had overshadowed the equally important war on terrorism, according to Rommel Banlaoi, head of the  Philippine Institute for Peace, Violence and Terrorism Research, which has been advising the defense establishment on threat groups.

The fighting in Marawi was “an outcome of continued downplaying of threats” from pro-IS groups, Banlaoi said.

“This government attitude of downplaying the threat resulted in unintended complacency in gathering actionable intelligence information necessary for the development of an effective preemptive counter-terrorism plan,” he said.

“The battle in Marawi City could have been prevented had government forces seriously exercised due diligence in gathering reliable and accurate intelligence information while enemy forces were still in [the]  inception stage,” Banlaoi said.

Military officials have strongly denied that there had been a failure of intelligence on IS plans in Marawi.

On Tuesday, the President said he wanted to finish the fighting soon and saw no satisfaction even in winning it.

“I already had the complete picture and I knew that it would be a long fight,” he said at the Eid al-Fitr celebration in Malacañang.

In his report to Congress on the martial law declaration, Mr. Duterte said the Maute group, which had 253 men by late 2016, was bent on turning all of Mindanao into an IS province. As much as 75 percent of Marawi had been infiltrated by the Maute group and the Abu Sayyaf, his report said.

Solicitor General Jose Calida said martial law was justified because of the “festering rebellion” of the Maute group, which had allied with Hapilon’s Abu Sayyaf faction and pledged allegiance to IS.

Calida said the “more dangerous” Maute group had “transmogrified” into an invasion force of foreign terrorists to launch attacks in the Philippines if its members could not travel to Syria to fight alongside IS.

Despite shelling and bombing runs, the terrorists remain well-entrenched in a small area in the city, posting snipers at strategic points in Marawi to prevent the advance of troops more accustomed to jungle warfare than urban fighting.

The Marawi siege has alarmed the country’s Southeast Asian neighbors.

They fear that IS is trying to set up a stronghold in Mindanao, which it could use as a springboard to launch attacks across the region.

In truth, Omarkhayam Maute studied in Egypt where he embraced Islamic militancy, according to various intelligence groups.

He taught at a madrasah in Indonesia, where his wife is from, but eventually went back home to pursue his dream of establishing a state purely for Muslims in Mindanao.

His older brother, Abdullah, was more radical and inherited their father Cayamora’s ideals as a former official of the Moro Islamic Liberation Front. Cayamora and wife Farhana—described by police as the group’s financier—have been arrested separately.

The brothers had set up Daulah Islamiyah, which the police had played down as a group of small-time crooks operating near Lanao’s forests.

The group grabbed national headlines in September last year when they claimed responsibility for bombing the President’s hometown of Davao, killing 15 people.