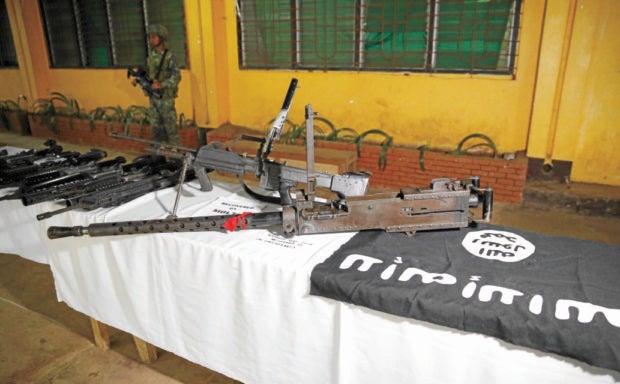 A Philippine Marine guards high-powered firearms, including a 50-caliber machinegun, ammunitions, uniforms, and black ISIS-style flags Tuesday, May 30, 2017 in Marawi city southern Philippines. Philippine forces pressed their offensive to drive out militants linked to the Islamic State group after days of fighting left corpses in the streets and hundreds of civilians begging for rescue from a besieged southern city of Marawi.(AP Photo/Bullit Marquez)

President Duterte has compared the scourge of Islamic extremism to that of Adolf Hitler’s Nazi ideology, even as he warned the fight against groups allied with the Islamic State could take years to win.

Mr. Duterte said the drug-fueled rebellion now happening in Marawi was being waged by a “brutal and cruel group” which is “an international insanity.”

While saying the government was winning in the battle for Marawi, Mr. Duterte cautioned the war against ISIS-inspired groups could drag on for decades, up to the time of the police officers’ grandchildren.

“There’s no telling when will this war would end,” he said.

“There’s less enemy to contend with, less resistance, less fighting,” Mr. Duterte, in a press briefing after meeting with members of the police regional command, said when asked about his earlier statement that fighting in Marawi will soon be over.

The President earlier said the fighting in Marawi could be over before the end of the month.

But when reminded about the month ending today (Friday), the President said the end of the fighting in Marawi “is something which I cannot predict.”

The President said he was planning to visit Marawi City, but would not say when.

He earlier said the Presidential Security Group has advised him not to announce where and when he was going.

“The troops must see me there. Their lives are not less important than mine,” he said.