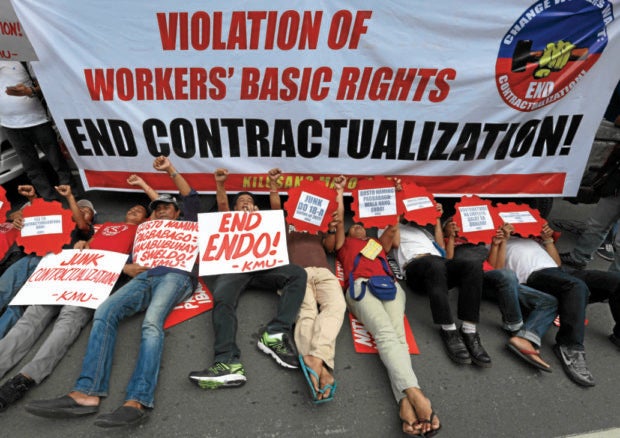 TOTAL BAN Labor activists are calling for the implementation of a total ban on contractualization. —
INQUIRER/ MARIANNE BERMUDEZ

Some 50,000 workers have been regularized since the Department of Labor and Employment (Dole) issued Department Order (DO) 174 in March, according to labor officials.

Under endo or the 555 scheme, workers renew their contracts every five months so employers can avoid hiring and  paying them as regular employees, who become entitled to various benefits and privileges after six months at work.

Labor Secretary Silvestre Bello III said he expected the number of workers being regularized to increase when the Dole started to strictly implement the order by next month.

“In fairness to management and employers, they are slowly complying to regularize their employees,” he said.

Despite DO 174, labor groups are still clinging to President Duterte’s campaign promise to put a stop to labor contractualization.

“After one year, President Duterte still has to make good on his promise to end contractualization. Contractualization and endo have remained rampant up to this day,” said the Trade Union Congress of the Philippines (TUCP).

The most worrisome impact of DO 174 is not the content of the document, but what it omits out, according to the Associated Labor Unions-Trade Union Congress of the Philippines (ALU-TUCP).

By contrast, DO 18-A, issued by the previous Aquino administration, explicitly prohibited employers from refusing to provide a copy of the service arrangement to workers. This prohibition is absent in DO 174.

The service arrangement details the terms of a job, including the duration and monetary value of the contract between contractor and principal.

“Without that transparency, it would be difficult for labor groups to strategize. You would be less likely to have security of tenure because you could be dismissed anytime by the manpower service agency,” said ALU-TUCP spokesperson Alan Tanjusay.

“A slight mistake and you’re out. There’s no due process because you don’t even have any idea how long the contract would last,” he said.

The Employers Confederation of the Philippines (Ecop) said legal contractualization, or the tripartite arrangement, should not be banned, warning that Philippine competitiveness would be undermined, leading to more loss of jobs.

“In the past, we really wanted people to get jobs so [some employers] closed their eyes. There were jobs, but they were working under a 555 arrangement,” Ecop president Donald G. Dee said, referring to endo.

A tripartite arrangement has three main elements: the principal employer, the manpower service agency and the workers. The principal taps the agency to provide labor for work considered non-core to the business operation, such as those performed by security guards, and then the agency hires people to do the job.

Although they spend most of their work hours under the supervision of the principal employer, the workers and the principal do not have an employer-employee relationship, according to current rules. The workers answer to the manpower service agency.

Dee said that business has been adjusting to additional costs brought about by DO 174 but nevertheless supportive of the order.

Under the new order, the paid-up capital of corporations, partnerships and cooperatives should be at least P5 million, higher than the P3 million prescribed in DO 18-A.

The added costs for employers include the increase to P100,000 in registration fee for potential contractors, up from P25,000.

The ALU-TUCP said that as far as the issue of contractualization, endo and 555 was concerned, it was now all in the hands of Mr. Duterte.

[We are] counting on his word that he would not abandon his promise to ban contractualization, endo and 555,” Tanjusay said.

Labor groups are still expecting Mr. Duterte to issue an executive order  that will totally abolish contractual employment. They were not happy, obviously, with DO 174, saying that the order would only encourage the perpetuation of contractualization in the country.

The department order listed down “prohibited” practices, such as contracting through an in-house agency and contracting work that is also done by regular employees.

But as far as Labor Secretary Bello is concerned, the ball is now in Congress.