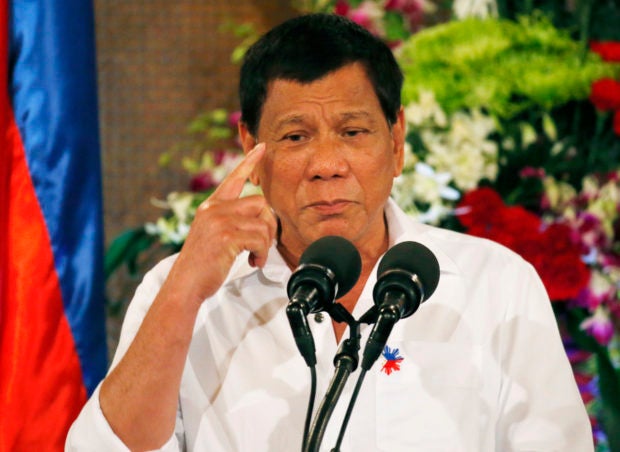 President Duterte on Wednesday said that he was willing to risk losing the Presidency in his war against illegal drugs.

Speaking at the 120th anniversary of the Presidential Security Group (PSG), Mr. Duterte also said that armed terrorists who do not show signs of surrendering should be shot dead.

“Let me tell you frankly: I will not allow, even at the risk of losing the presidency, I will not allow any soldier or policeman to go to prison for destroying the drug industry in this country,” Mr. Duterte said.

The Department of Justice earlier downgraded from double murder to homicide the charges against Supt. Marvin Marcos and 18 other policemen in the killing of Albuera Mayor Rolando Espinosa and another detainee, Raul Yap, in a predawn raid on the Baybay, Leyte, subprovincial jail in November last year.

“I said then when I was still mayor, ‘Don’t destroy my locale because I will kill you.’ When I became President, I said, ‘Don’t destroy the Philippines or our children…I will really kill you,’” Mr. Duterte said.

“Let’s be frank about that and I will really do it…And for those who are facing charges, they can be very sure that they will walk out free men. You have no problem when it comes to that,” he added.

The President also said that he has ordered that armed terrorists should be shot dead since they are not covered by the Geneva Conventions, or the international protocols that protect people during times of armed conflict.

“Well, they are not members of the Geneva Convention. They are just plain bandits, gangsters, and what they really want is just to kill. And if you want to destroy us, we will also destroy you,” Mr. Duterte said.

“And my orders to you is that if he carries a gun, he is not a soldier, he is not a policeman, just kill him. That is my order because they will kill us,” he added.

“As long as there is no indication of surrender or raising of the hands, don’t let them live because they will fight another day,” the President said.

“My order is, ‘If you destroy my country, I will destroy you. Be it drugs or terrorism’,” he added.

Read Next
‘Show cause order vs CA justices a breach of separation of powers’
EDITORS' PICK
Smart powers Liga Adarna Season 4: Race to the Top
COVID spread in Metro, 4 other areas slows down
Miss Universe Philippines partners with JC
Don’t throw away your face shields just yet
Allies to Leni: Time to decide
Huawei’s relentless mission to bring ultimate health and wellness tracking for your fitness goals
MOST READ
Robredo pressed: You need to decide now
Duterte threatens raps vs Gordon
After announcing to run for VP, Willie Ong bolts Lakas-CMD
PDP-Laban faction unfazed by Isko-Ong tandem in 2022 polls
Don't miss out on the latest news and information.