MARAWI CITY — The government on Tuesday rejected an exchange of captives with Islamic State-inspired gunmen holed up in Marawi, as the battle for control of the city entered its sixth week with intense bombing raids by military planes on a shrinking terrorist-held zone.

“It’s not possible. We do not negotiate with terrorists,” Secretary Jesus Dureza, presidential adviser on the peace process, told the Inquirer by phone.

Presidential spokesperson Ernesto Abella reiterated the government’s policy of not dealing with terrorists.

“[The] government’s policy not to negotiate with terrorists remains,” Abella told reporters in Malacañang.

He said the talks on Sunday between Muslim emissaries, including religious leaders, and the Maute terrorists were not sanctioned by the government and the military.

“Any demands made inside therefore hold no basis. Let us remind the public, the gravity of the terrorists and their supporters’ offenses is immense and they must be held accountable for all of their actions,” Abella said.

A source who went into the conflict zone in Marawi with the emissaries to talk with the terrorists told the Inquirer on Monday that Abdullah Maute, one of the leaders of the gunmen holed up in the city, informed the group that Fr. Teresito “Chito” Suganob, the vicar general of Marawi whom they seized as they stormed the city on May 23, was alive and that he was willing to release the priest if the government would free his parents and relatives who had been captured by the authorities.

Dureza said the Mautes’ parents had “to undergo judicial process.”

“If we will give in to their demands, it seems they are also terrorizing us. So negotiations are not possible,” he said.

On June 9, Ominta “Farhana” Maute, the mother of Abdullah and his brother Omarkhayam, was arrested by police in Masiu, Lanao del Sur province.

Two days earlier, the Mautes’ father, Cayamora, and his second wife were arrested at a police-military checkpoint in Davao City.

On June 18, Farida and Al Jadid Romato, cousins of the Mautes, and Abdul Rahman Dimacula, boyfriend of Farida, were arrested in Iloilo City.

The Mautes and the Romatos were covered by Arrest Order No. 1 issued by Defense Secretary Delfin Lorenzana shortly after President Duterte clamped martial law on all of Mindanao to quell the attempt of the Mautes and their allies from the Abu Sayyaf bandit group to establish an enclave for the Islamic State (IS) jihadist group in the southern Philippines.

The government has brought charges against 17 people, including the Maute brothers and their parents and former Marawi Mayor Fahad Salic, whose name appeared on checks found by soldiers in a house in the city used as a sniper’s nest by the terrorists, and an alleged bomb maker, Mohammad Noaim Maute.

Among the 17 is 50-year-old nurse Jadzrie Harad Saabdula, who allegedly provided medical help to the terrorists, according to Justice Undersecretary Erickson Balmes.

“It’s up to the government. It’s the government’s call whether to enter negotiations or not,” De la Peña said on Church-run radio on Tuesday.

The family of Suganob was also leaving his fate to the government and the military.

“We are not in a position to suggest what should be done. We leave it to [the military] and the government what to do,” said Rufino Larroza, Suganob’s uncle. 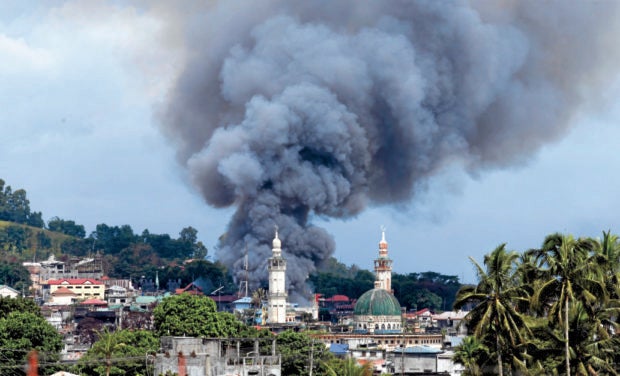 AIRSTRIKE A bomb dropped by a military plane explodes as government troops press their assault on Maute terrorists in Marawi City. —JEOFFREY MAITEM

Lt. Col. Jo-Ar Herrera, spokesperson for the military’s 1st Infantry Division, said on Monday that the priest was seen alive on Sunday in a part of the city still in the hands of the terrorists.

“We don’t have details of his health. We were just told that he was sighted alive,” Herrera told reporters.

The authorities believe Suganob and about 200 other Christians are being held by the Maute and Abu Sayyaf fighters as human shields.

The Mautes and Abu Sayyaf leader Isnilon Hapilon have pledged allegiance to the Middle East-based IS, and they have support from foreigners fighting for the jihadist group in their assault on Marawi.

Eight foreign fighters, including those from Chechnya, Indonesia and Malaysia, were killed in the early days of the crisis, according to the military.

More than 360 people—including 270 terrorists, 70 soldiers and policemen, and 27 civilians—have been killed since the fighting began on May 23 when the Mautes and their Abu Sayyaf allies stormed the city.

Heavy fighting broke out on Tuesday, with the military launching airstrikes on terrorists’ positions in an area of the city center that had been reduced from 8.7 square kilometers a week ago to just a square kilometer, according to Herrera.

The protracted seizure of the city by the terrorists has worried Southeast Asian governments about the extent of the IS group’s agenda may have gained traction in the southern Philippines, which is used to banditry, piracy and separatism than radical Islamist ideology.

The terrorists’ organization, combat capability and use of heavy weapons has raised fears in the mainly Roman Catholic country that the Marawi fighting could just be the start of a wider campaign, and be portrayed by the Maute group as a triumph that could boost its recruitment.

Fighting has raged in Marawi since May 23 after a failed military attempt to capture Hapilon.

The force of the terrorists’ response surprised the military, leading the government to lose not just Hapilon, but also control of the city. —With reports from Dona Z. Pazzibugan, Julie M. Aurelio, Nestor P. Burgos Jr., and the wires