Duterte: I will rebuild Marawi 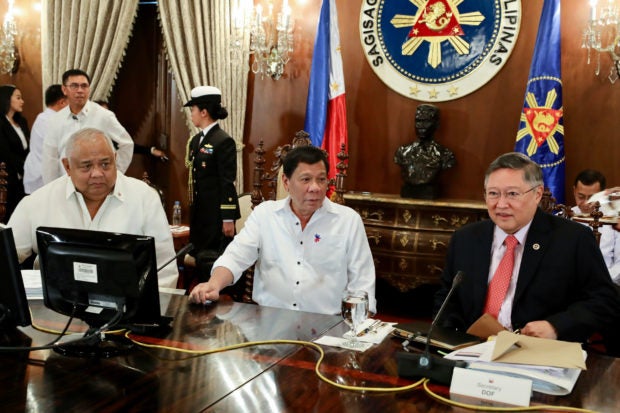 MANILA — As bombing runs and intense gunfights reduced most of the city to rubble, President Duterte promised to see to it that Marawi would rise as a prosperous city again, even as he said he had known the fight against the extremists would be a long one.

Emerging from a six-day furlough from the public eye to lead the Eid’l Fitr celebration in Malacañang, Mr. Duterte said he took no pleasure in winning the war and that he was hurting from the destruction and the deaths in the Islamic city.

“I am not happy that the Maranaos are dying. I am not happy with the hardships you are facing. I see no satisfaction even in winning the war. I just wanted this thing over, and these radicals and extremists out of the Muslim world,” Mr. Duterte said.

He also said he knew there would be a lengthy battle in Marawi when declared martial law for Mindanao while he was in Moscow.

“I knew how long it would take for us and I knew the deployment of the snipers and where they kept their arms. I already had the complete picture and I knew that would be a long fight,” he said.

“But if you ask if I am happy, son of a… I am also bleeding like you,” he added.

He said he had cousins who joined the Maute, one of the groups that rampaged through Marawi and had pledged allegiance to the Islamic State.

Mr. Duterte vowed once more to end the conflict and promised as well to bring back Marawi to its former glory.

“But one thing I will promise you, my brother Moro, I will see to it that Marawi will rise as a prosperous city again,” he said.

He had set aside P20 billion to rebuild the city, and said he would allocate more if necessary.

“I will rebuild Marawi because if not, I will remain forever the villain,” he said.

He stressed that his government was committed to the pursuit of peace.

“To our brothers and sisters who have been affected by the violence and conflict in Mindanao, I assure you that the government is committed to securing just and lasting peace in the island. The military and the police remain hard at work to ending the crisis with dispatch, especially in Marawi,” he said.

He called on them to channel their energies to building a society grounded on “love, respect, and understanding.”

“Because it is by dedicating our lives to the betterment of humanity that we can best demonstrate our obedience and devotion to Allah,” he added.  SFM