Duterte says he knew Marawi conflict ‘would be a long fight’ 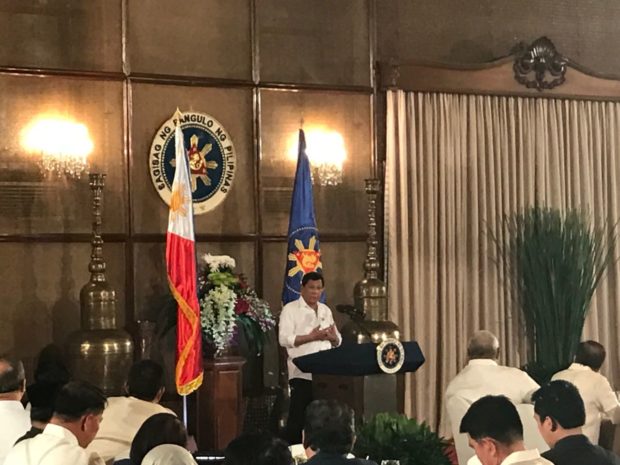 President Rodrigo Duterte on Tuesday night said he knew the battle between government troops and Maute terrorists in Marawi City “would be a long fight.”

Duterte admitted he was “bleeding” like the victims of the siege and the thousands displaced in the strife-torn city.

The President said he was aware of the extent of the battle when he declared martial law while he was in Moscow.

“I already have the complete picture and I knew that it would be a long fight. But kung tanungin niyo ako, anak ng… I am also bleeding like you,” he said in a speech before Muslim leaders and diplomats during the Eid-al Fitr celebration in Malacañang.

Duterte said he was sorry for the devastation the Marawi siege had brought to the Maranaos.

“I am very sorry that this has happened. I am not happy na may namamatay na Maranao,” he said.

He lamented how the “fractured ideology” of the Islamists terrorists killed and destroyed the city of Marawi.

“Ang masakit sa akin pumasok ang fractured ideology. All they want is to kill and destroy,” he said.

Despite the havoc the fighting had brought, the President assured Marawi would rise again.

“But one thing I will promise you, my brother Moro: I will see to it that Marawi will rise as a prosperous city again,” he said. /atm